Review: The Mirror of Her Dreams by Stephen R. Donaldson Terisa is a woman with self-worth issues. Growing up as the only daughter of rich but neglectful parents has left her doubting her own existence. As a result she had decorated her apartment with dozens of mirrors to remind herself that she does in fact exist. She has also taken a job as a secretary at a mission house believing she might make a difference. However that notion is soon shattered when she sees that despite how hard the reverend tries he is ineffective. Terisa’s life is turned upside down when a young man named Geraden falls through one of her mirrors. Geraden seems just as surprised about his arrival as he had seen a mighty warrior in the mirror and came across to recruit him as a champion to save his world. Instead he found Terisa. Geraden believes that there are larger forces at work and convinces Terisa to come with him through the mirror. What she finds is a kingdom in danger ruled by a monarch well past his prime and ineffectual. With enemy forces gathering on every side can Terisa make a difference?

What I really enjoyed about this novel is how well it effortlessly combined a number of genres most notably fantasy and mystery. As Terisa was baffled as to what particular character’s motivations were so was I and I love to be kept guessing like that. Donaldson does a particularly excellent job of getting into Terisa’s head and the way her doubts and preconceptions colored everything she encountered was masterful. The magic system of imagery was well thought out and far more interesting than that of the Covenant books. Fans of Sanderson’s enigmatic magic systems will be left speechless. The only negative issue was a slight pacing one, as the beginning was a bit slow but aside from that this was a first-class read.

Overall I’m surprised that the Mirror of Her Dreams does not seem to be held in as high Esteem as the Covenant books. In my humble opinion it’s just as good if not a good deal better. After the cliffhanger ending I’m looking forward to reading the conclusion. 8.75/10
Posted by Craig at 9:19 PM No comments:

Essay: Readers are not your bitch

It’s a debate that never seems to go away within the fantasy/sci-fi community; are authors obligated to their readers to have the next book in a series out in a set frame of time? The argument has often focused on George R.R. Martin and the next Song of Ice and Fire book A Dance With Dragons but not exclusively so. For the record here is where I stand in the debate; Of course authors are not obligated to work within such timeframes and should pursue side projects if they are that way inclined. By buying a book the reader has paid for that particular piece of literature and that piece of literature alone. Of course it is only common curtsey for an author to try and keep their readership updated with where things stand. A recent event has recently made me reexamine the argument from a different angle, namely are readers obligated to the authors? The event in question is Melanie Rawn’s announcement on her website that TOR have cancelled the third book in the Spellbinder series, an urban fantasy/paranormal romance trilogy, due to poor sales but have signed her up to another trilogy closer to the epic fantasy of her earlier days. Rawn’s antics once the news was broken has left me, well quite simply baffled.

Before I get into that I think it is important to provide some background information. This is the second trilogy in a row that Rawn is leaving incomplete, the earlier one being Exiles. The second installment of that series came out in 1997 and ended in a cliffhanger. Melanie underwent some family troubles and a bout of depression that initially left her unable to complete the final volume The Captals Tower. Once Rawn felt herself able to write again she started on Spellbinder. As far as The Captals Tower goes it appears she has done no work on it whatsoever, aside from some possible research a few years ago, and has made no announcement when or if she will ever complete it. When Melanie made this announcement that Spellbinder was cancelled needless to say that her fan base was not enthused which seems to have come as a surprise to Melanie. She then seems to have had something of a child’s tantrum. With the reaction not being what she expected she took the announcement down. On her website is a thread where her fans can come and rant about the Captals Tower, a place that Rawn has said herself she doesn’t go so fans can go and vent their frustrations without upsetting the author. Yet after the announcement when people were on there voicing their disappoint she turned up with a few catty remarks. On another thread when a reader voiced the opinion that he or she now waits for a series to be completed before buying and reading it Melanie came out and said she doesn’t understand that. Oh come on a reader has been waiting thirteen years so far for a conclusion to Exiles and there is still no end in sight and the author can’t understand that type of behavior? While it is obvious this latest setback is not Melanie’s fault she could have handled it a lot better. With the first two spellbinder books selling poorly there is little chance that another publisher will pickup the third but there is nothing stopping Melanie from self publishing it or posting it on her website. At the time of writing Rawn has made no announcement whatsoever about this book and she shouldn’t be surprised if her fan base doesn’t share the same enthusiasm for the proposed next trilogy. What seems to have set Melanie off is that if her readers take the wait and see approach then her new series will have just as poor sales as Spellbinder did, yet Melanie seems to believe that the readers should buy whatever she writes just because she wrote it. Readers have no such obligation and there is enough of a market out there that they won’t ever have to. Melanie Rawn it times for you to realise your readers are not your bitch.
Posted by Craig at 2:37 PM 3 comments: 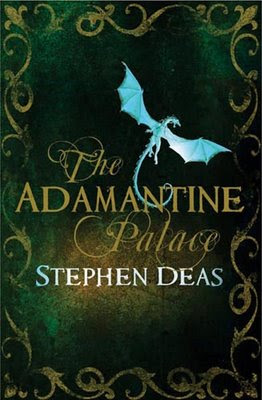 The speaker of the realms, Lord Hyram, is riddled with a strange sickness that is gradually destroying him. He is due to name his replacement and the obvious candidate is Queen Shezira with whom he had an earlier agreement. Prince Jehal however has other ideas. He sets in motion an elaborate scheme to seize power for himself. Against the backdrop of political byplay nobody seems to notice that the loss of a white dragon might have severe consequences. Dragon’s are kept docile through potions mixed by the alchemists, now the white is starting to remember her true nature…and how humans have enslaved her and all her kind.

Dea’s novel sets off at a breakneck pace and the reader is initially left with very little opportunity to actually get to know the protagonists. As the novel wore on I thought that Deas settled into a better rhythm but still everything felt too rushed. Prince Jehal is masterfully realized and really steals the show as the arrogant upstart prince. However aside from one or two of the other POV characters everyone else feels flat and underrealized.

World building is another area that Deas could have fleshed out considerably more. The political system is a medieval type setup with kings and queens controlling their own territory, answerable only to the speaker who is charged with keeping the peace. The political byplay is certainly interesting but several steps removed from a Martin or even a Jordan. The fact that Jehal seemed to carry out every aspect of his plan almost single-handedly felt extremely unrealistic. I don’t think there is a monarch around who has never heard of delegation. The individual cultures that are bound to exist in these kingdoms are never explored and makes the world feel entirely one dimensional.

The premise with the dragons was intriguing and I liked the direction Deas is going with it. Keeping it in the background worked well in creating a sense of impending disaster. In Deas’ favour he is easily injects humor into his banter without having it clash with the darker nature of the story. Although the issue of the speaker is more or less resolved by the end of the book, none of the other plotlines are. I realize that this is just the start of a series but it made the ending anticlimactic.

Overall I don’t feel like Deas is giving us anything really new here. What he does give is good but there are a lot of authors doing it better. The flaws in his writing are certainly not fatal and I expect Deas will come back strongly and realize his obvious potential. 6.25/10.
Posted by Craig at 9:40 PM No comments:

Shen Tai has spent the last two years among the dead. In an effort to honour the memory of his recently deceased father he has been burying the unnumbered dead on an isolated battle site. He makes no distinction between those of his own people, the Kitan, and the bones of their former enemies. As a result he is honoured by both sides who supply him with the necessary provisions to survive. Shen’s life is changed forever when he learns that the princess Cheng-Wan has decided to bequeath two hundred and fifty Sardian horses to him. One such horse is enough to reward a man greatly, four or five will raise him far beyond his peers, two-hundred and fifty is an unthinkable gift more than even the emperor himself has. Before Shen can even consider what such a gift will mean he is surprised by the arrival of Chou Yan, an old friend bearing some important news. Before he can give this news he is slain by his Kanlan guard who was secretly an assassin in disguise charged with killing Shen. Shen survives the attempt but is shaken as the assassin was sent after him before he was given the horses. Shen has little choice but to return to attempt to return to the capital, hoping answers may be found there.

Like many of Kay’s previous novels Under Heaven is based on a particular time period namely 8th century China. A number of other authors have utilized Chinese culture in fantasy settings but what sets Kay apart is the way Kay seamlessly weaves an unfamiliar worldview and way of thinking about the characters and makes it feel…well normal and believable. Something I noticed in some of Kay’s earlier novels was an overarching theme; namely the world is filled with interconnecting stories. This theme is present here as well and is conveyed well through the use of character perspectives. Most of the novel is told from Shen’s perspective but are broken up by chapters from other usually minor characters view of events. Kay does a good job of conveying that while the events of Shen’s story have an impact on them they are in the middle of their own stories. Indeed the direction the story took at the three-quarter mark was intriguing. There is an all important war being fought but the reader gets no more than glimpses of it as Shen decides his life lies in another direction.