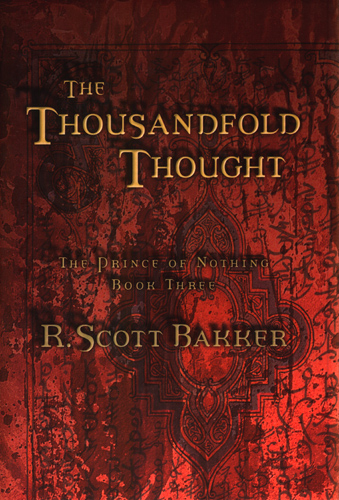 Having survived the siege of Caraskand the Holy War now has an open road to the city of Shimeh. Kellhus has been proclaimed as a prophet and now has total control of the war. Achamian has finally revealed the existence of Kelhus to the other mandate sorcerers but has decided to aid the prophet and teach him the gonsis. Having been humiliated Conphus is exiled by Kelhus but an unexpected turn of events may make him an even bigger factor than before.

The third volume is definitely more psychologically driven than it's predecessor. Cnaiur has seemingly finally succumbed to his madness and Achamian is forced into a position where he has to confront the very fabric of existence. Bakker does an excellent job here and I found it utterly fascinating watching these character's deepest thoughts unfold. I doubt it is for everyone but needless to say I'm impressed.

Pacing was an area in which Bakker controlled the narrative extremely well. For the first two thirds it moved steadily, and with the arrival at Shimeh and the inevitable confrontations it quickened. Bakker switched here to short, sharp view point changes that gave a frantic feel to proceedings. While some of these confrontations were given a good chance to develop, ie Kelhus and Moenghus others felt too rushed. The Cnaiur-Moenghus meeting was over in two pages and after all the build up this was disappointing. Granted that Bakker's has envisioned this trilogy as part of a larger whole I still think it could have benefited from a more solid conclusion.

Overall Bakker once again delivers a satisfying read, though a more definite conclusion would have been welcome. 8/10.
Posted by Craig at 12:55 AM No comments: Having finally learned of her uncle Robert's coup of her father's throne Anne Dare sets about gathering a force strong enough to challenge him. However there are those who may wish to use Anne as a figurehead to further their own ambitions. Strange forces are at play and Anne begins to realize that she and her unique new powers may be pawns in a much larger game. Stephen meanwhile is embroiled in a rather delicate situation of his own. Forcibly separated from his companions the foundations of his understanding of the world is tested again as he learns that different factions are in operation in the church. Stephen finds himself charged with the task of recovering the dairy of Virgenya Dare herself. Aspar and Winna set off to try rescue Stephen. This soon turns into a fight for their own survival when a chance encounter with Fend and a woorm lead to them being poisoned by the beast.

Keyes uses the same technique as the previous two installments of ending most chapters on a cliff-hanger before switching view points. Again I feel that this works well in terms of pacing and you can't really complain about it when the next chapter addresses an earlier cliffhanger. The focus is very much on Stephen, Anne and Aspar on this book with Muriele and Leoff, and to a lesser extent Neil and Casio taking back seats. All three characters are forced to confront aspects of themselves that they don't necessarily like.

Having laid the ground work in the first two novels Keyes takes this one in a bit of a different direction; turning some aspects on their head. Where before it seemed obvious where good and evil lay in these books I'm now left wondering whether the 'good' characters are in fact doing the right thing and visa versa with the 'evil' characters. I am certainly anxious to see where Keyes takes this in the final installment.

Overall yet another strong offering from Keyes. 8/10.
Posted by Craig at 1:15 AM No comments: