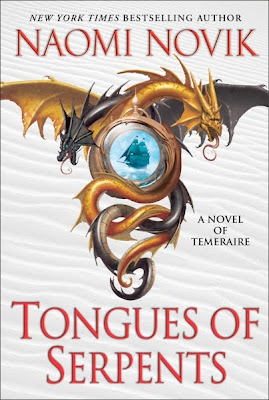 After Lien's decimation of the British fleet the government is fearful of Temeraire's divine wind and this coupled with Laurence's status as a traitor sees both shipped off to the colony in Sydney where they will both be out of the way. The duress of the journey is for them to begin a dragon covert in Australia with three dragon eggs. Upon their arrival Laurence discovers that the governor has been been displaced in a military coup and both sides are clamoring for his support. Feeling that their situation can only worsen by helping either side Laurence and the rest of the corps set off on an expedition to find a pass from Sydney through the Blue Mountains. However on the way one of the dragon eggs is stolen, supposedly by smugglers who may or may not be operating in the area, setting up a chase across the continent to retrieve the egg.

Early on in the series I was concerned that each sequel would just end up following the same structure of the first book, as Throne of Jade obviously does. Victory of Eagles impressed me from this perspective as it was decidedly different from the earlier books and while the same can be said for Tongue of Serpents there are other large problems.

Most of book comprises an overextended travelogue across Australia. The dangers the crew faces from the environment and local fauna lacks the tension that the war and other obstacles the previous book contained. Tellingly neither Laurence nor Temeraire really grow as characters either and having parts of the story narrated from Temeraire's perspective no longer has the novelty value to make up for this. There are certainly some interesting developments in the war that are mentioned in passing but these will only be addressed in a future volume. On the positive side many of the elements that Novik has done so well including Temeraire's charm as character and the byplay of the characters remain, as well as the introduction of a couple of promising dragons. So at least fans of the series should be kept interested.

Overall this would have to be considered the weakest volume of the series with not much happening and the tension sorely missing. Many of the elements that interested readers before however remain. Hopefully a return to form will be on the cards. 7/10.
Posted by Craig at 11:33 PM 1 comment:

Review: Against All Things Ending by Stephen R. Donaldson 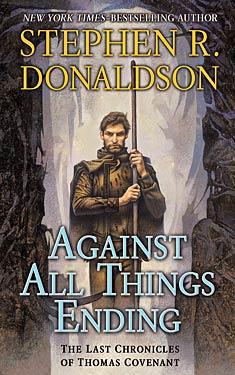 I'm really enjoying Donaldson's Last Chronicles of Thomas Covenant so much so that I'm considering reading the first and second chronicles again. See while I did enjoy them well enough all those years ago I don't know if I really appreciated them. The Covenant books aren't for everybody; if you're looking for a light and fluffy easy-read stay well clear. The Covenant books are highly complex and deeply engrossing; simply put in my humble opinion they are nothing short of masterpieces.

Through the combined power of her staff of law, Loric's krill and Thomas Covenant's white gold wedding ring Linden Avery has successfully brought her lover back to life. But there is a price. Unleashing such a large amount of raw power has roused the worm at world's end which will now devour the Land itself. Not only that but Thomas Covenant has not come back quite as Linden would have hoped for. Being part of the Arch of Time for centuries has left Covenant in possession of virtually all knowledge. Something his mortal frame cannot contain. Covenant struggles to stay in the present falling into cracks in his own mind which leave him in a catatonic state. Linden believes that the problem of the worm is far beyond her and resolves instead to rescue her son from Thomas' son Roger and the symbiotic croyel which has taken control of him.

The first part of the book seemed to lag for me as for about the first hundred pages Linden and her companions seemed to stand around trying to figure out what to do. This is only a minor blemish and the pace picked up after that, contrasting nicely with the breakneck battle and chase scenes to the more sedate traveling scenes. As always Donaldson gets right into Linden's head bearing all of her own insecurities and self doubt like no other author is capable of. This is where Donaldson's work has been labeled depressing and there is no doubt a level of maturity is demanded from the reader. The payoff of the lesson Linda learns is revealed beautifully with her conversation with Stave later on in the book and is well worth it. We also get to see things form Thomas Covenant's perspective for the first time since the second chronicles and it is certainly interesting to observe the effects being in the arch has had on him. The book concludes with same major story arcs resolved for both Covenant and Linden and sets thing up nicely for the finale.

Overall if you've enjoyed Donaldson's writing before you will do so again. 8.75/10.
Posted by Craig at 7:30 PM No comments:

During one of the issues a member of the exiles compares what they do to the 90's television show Sliders. Well close enough I guess. If you look at Exiles as a cross between sliders and X-Men you're right on the money.

A group of six mutants are plucked from their respective lives and dumped into a desert. There a short, balding man in a bow-tie calling himself the time broker, who claims to be a figment of their collective subconscious' informs them that they have become unhinged from time. In essence something has gone wrong in their respective timelines which has ruined their lives (For example Morph is now a jar of ooze lying forgotten somewhere in Beast's lab) this is the result of errors in other timelines causing a domino effect. The only way the Exiles can go back to their lives is to repair the time stream through a series of missions.

Looking at the initial lineup it is clear that the creators wanted to utilize characters that hadn't seen much screen time in the main Marvel universe. Age of Apocalypse Blink leads a team consisting of Mimic (who was an X-Men for a about five minutes in the main universe but leads the team on his own), a version of Morph similar to the AOA version, Thunderbird who was once under Apocalypse's control as his horseman War before breaking free, Nocturne daughter of Nightcrawler and the Scarlett Witch and Joseph son of Rogue and Magneto. With AOA Blink's popularity there was a very real danger that this book would just be about her but this is clearly not the case and all the characters get ample screen time. The character development here is superb and one of my favorite examples is Mimic's struggles to deal with their missions which often require a fatal solution. Mimic is his reality's version of Captain America and he now finds himself put into a position where he has to kill people he knows as heroes. His struggle with how to deal with this is fascinating.

Right from the get go it is obvious that there will be no punches pulled in this series and one of the original lineup is killed off on the first mission. The writers make full use of the advantage that they aren't dealing with characters from the main marvel universe without taking it too far. One of the most enjoyable aspects of the series is seeing the very different versions of the marvel universe the characters get to visit, everything from plague driven zombie worlds to world's without super heroes.

The series continues on very strongly up until about the seventieth issue where it really goes down hill. From that point on the stories don't always make sense and are often rushed and the character development of earlier issues disappears. Still there is a few signs in the 100th issue that the New Exiles might recapture the glory days of the original series. 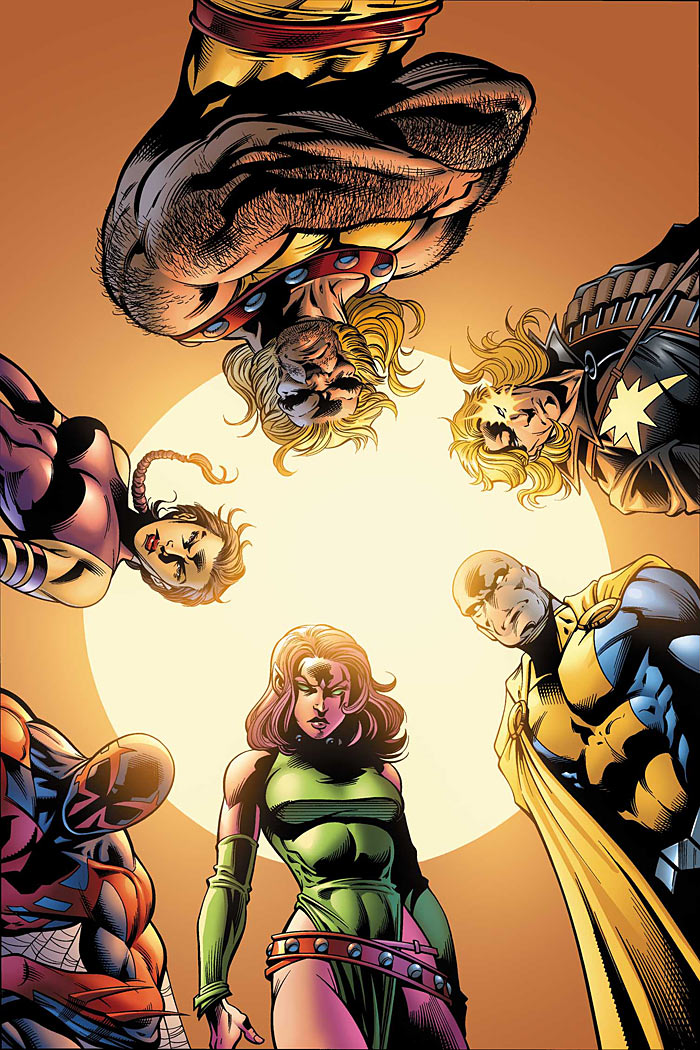 Overall Exiles is a great series that is strongly character driven. The last thirty odd issues are a bit of a letdown but did enough right that I will check out the new exiles. 8.5/10
Posted by Craig at 10:58 PM No comments:

Review: Captain in the Cauldron: The John Smit Story by John Smit and Mike Greenaway

I first became really interested in rugby around 1996/1997 at the age of twelve. One of my Dad's client's had a corporate box at Kings Park and we used to go down to watch the Sharks play virtually every home game. It was also during this period that a young man by the name of John Smit started playing for the Sharks. I watched firsthand while John went from an unknown to the longest serving Springbok captain in history and having the chance to read his autobiography I jumped at it.

First things first; Smit has written this book at the right time, when his career is starting to wind down. There has been a recent trend for sports biographies to come out earlier, (ala Kevin Pieterson) to take advantage of a high profile event (ala England winning the Ashes) and I find this generally lowers the quality as the sport star concerned isn't at the right maturity level and it can degenerate into a mudsling/self praise exercise. No such problems exist here. John strikes the right balance between respecting his peers and not shying away from being blunt when necessary. His takes on Luke Watson and Kevin Putt are good examples of this and I was both impressed and surprised at how frank he was about the politics in Springbok rugby considering he is still playing. Like most autobiographies the story follows John from childhood up until recent times, though the trap of focusing too much on the early days is avoided and the meat of this book deals with the rugby period of his life as it should.

My only criticism would be that there are some areas I would have liked to have seen dealt with that are strangely overlooked, like Smit's feeling on Jake White being pushed out of the Springbok coaching setup after the world cup triumph.

Overall Smit's book is clear and concise and gives an in depth look into the springbok setup. I highly recommend it to supporters of the man himself or Springbok rugby in general. 8.75/10 cauldron
Posted by Craig at 2:26 PM 2 comments: