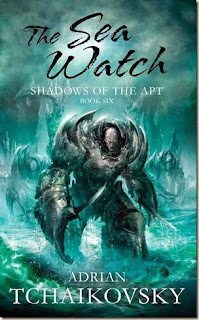 Stenwold Maker is poised to bring in his ally Jodry Drillen into the vacant speaker's chair in the assembly, something he has been working on since the war with the wasp empire ended. However Master Failwright, a merchant with an interest vested in shipping, competes for attention at the assembly. Failwright is adamant that Collegium's trade by sea has been targeted by a hostile force as a number of ships have disappeared. While most of the assembly is incredulous at the claims, Stenwold decides to investigate and quickly learns that there are other powers interested in taking Collegium.

Stenwold is the main focus in this book. He has to deal with the juxtaposition of what his life was as a spymaster compared to what it now is which is more of a statesman. He is put through a ringer which tests his courage and beliefs. At least half a dozen support characters are given point of view sections throughout the book and the author does an excellent job of displaying the complexity of their motivations and ensuring the reader has a vested interest in all of them.

The world-building is interesting with the introduction of the sea-kinden who have recently taken their first steps into aptitude. This gives the author a chance to expand on the steam-punk aspects in an environment where no fuels can be burned, for obvious reasons.

The pace is well maintained throughout and the book stands rather well on it's own.

Overall strong character development and interesting world-building make for a strong installment. 8.5/10.
Posted by Craig at 2:05 PM No comments:


A giggle tore itself from Sasha’s throat. Flaky snowflakes lazily drifted to the thick carpet of white around her.
“Thank you Santa” she whispered, her breath misting in front of her face.
Sasha hated to admit it but she had almost stopped believing. After all she was eleven years old.Her wish for a white Christmas had come true, something her daddy could never give her.
Then she noticed the old woman huddled in a threadbare blanket. Sasha immediately knew she was dead; nobody’s skin should be the shade of overripe blueberries.
“I’ve killed her.” Sasha murmured and began to shake.
Posted by Craig at 10:31 PM No comments: 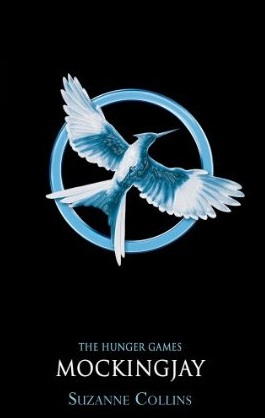 Having been rescued by the rebel elements based in district thirteen, Katniss has to come to terms with the loss of her home district 12 and the fact that Peeta is in the hands of the Capital. The rebels want her to be a symbol for the revolution but can she do it knowing her every action could have dire consequences for Peeta?

This novel suffers from serious pacing issues with the first half of the novel being unbelievably slow. Events are happening within the novel but with Katniss being our sole view point and seemingly uninterested in large parts of the war we get don't get much of an appreciation of this. This leads into another problem with larger events happening on a rather quick timescale and no explanation for how this was accomplished. For example the conquest of the districts seems to be done within a matter of weeks but our one glimpse into this seems to have the rebels losing. Katniss as inspiration and the continuous flood of propaganda just doesn't seem a realistic explanation.

I was impressed that for the first time in the series another layer of complexity is added to some characters. For the most part the characters have been decidedly black and white but that is no longer the case. Gale is probably the best of example of this.

Overall this novels suffers some severe pacing issues though it was nice to see a complexity added to some of the characters. 6.5/10.

Review: The Fall of Ventaris by Neil McGarry and Daniel Ravipinto 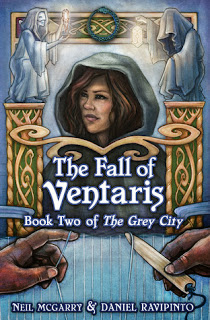 After gaining membership into the Grey, a secret society of thieves, Duchess decides to continue taking risks. She attempts to set up a business partnership with a talented weaver Jana, who has been unable to gain membership to the weavers' guild due to her race. Gaining Jana membership and securing her trust will be no easy task but Duchess has a plan. Duchess also decides she needs to hire some muscle to watch her back. However she needs someone she can trust yet desperate enough to work for her. She decides to try and free Pollux, a disgraced white who no one quite knows what to do with. If that weren't enough she is contacted by one of the Uncle's henchman about recovering a precious ring that was gambled away.

The various sub-plots were a nice touch that worked really well in keeping the pace moving at a good clip. They provided minor resolutions across the novel and all tied quite nicely into the central plot.

As with the first book the story is very character driven with Duchess firmly in the center. I think a lot of writers lose sight of this and is one of this series greatest strengths. Some very interesting supporting characters were introduced, all very much with agendas of their own.

Again the world-building is strong and unobtrusive.

Overall the second book in this series builds nicely on it's predecessor and goes on to top it. 8.75/10.
Posted by Craig at 10:18 PM 2 comments: