Review: Alcatraz Versus The Shattered Lens by Brandon Sanderson 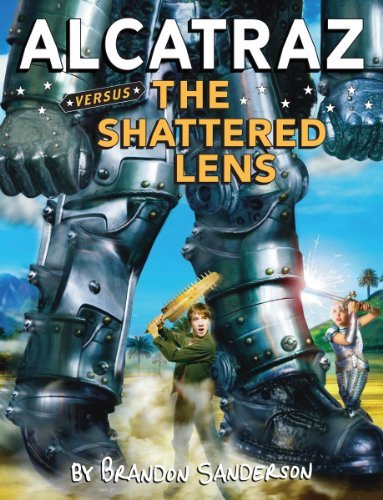 The librarians have the city of Tuki Tuki, capital of Mokia, under siege. The knights of Crystallia are not prepared to send aid, instead concentrating on the defense of Nalhalla. Alcatraz and Bastille formulate a plan to aid the besieged city by sneaking Aclatraz into the city so the knights are forced to rescue him. Once in the city Alactraz suddenly finds himself in charge and forced to make some difficult decisions.

It is always an advantage when having something, whether it be a book or a film, aimed at the middle-grade or young-adult market work on a number of different levels, ie having something it for adults as well as the target audience. Shrek is a perfect example of this. The Alcatraz books were too, until this volume that is.
I can't help feeling that Sanderson would not have been connecting with his target audience.

As in previous volumes Sanderson has fun playing around with writing conventions but his 'chapter' theme was certainly not as impressive as what he got up to in previous volumes. There is definitely some things thrown in for his regular readers but I doubt the middle-grade brigade is going to know who Asmodean is. In the end the balance is just not right with too much of a skew towards his regular readers. As a narrator Alcatraz can also come out as downright offensive to the reader at times and this another aspect where the balance has been lost.

Sadly the fourth Alcatraz installment while still amusing does not work as well as it's predecessors. 6/10.
Posted by Craig at 6:38 PM No comments:

Review: The Ashes: A Celebration by Roland Perry

As the title suggests this book is about the ashes, the longest running series in test cricket pitting Australia against England. Perry focuses on what he considers the biggest impacts, individuals and events, in the competition's history; 1: the 2005 Ashes 2: Lawrence-led Aborigine tour of England in 1868 3: W.G. Grace 4: The 1882 win by Australia at the Oval 5: Bodyline 6:Don Bradman 7: The 1977 Centenary Test 8: The Packer Revolution- World Series Cricket 9: Ian Botham 10: Shane Warne.

The decision to start with the 2005 series was an apt one, considering the interest this brought back to the contest. Switching then to the Laurence-led tour, or what was effectively the prehistory of the Ashes, was interesting and made a good change of pace.

If you're interested in cricket at all then this walk through the games history is for you and Perry certainly has a concise and very readable style. The problems for me came about mid-book. It is obvious that the author is rehashing a lot of his previous work, especially from autobiographies of Keith Miller, Don Bradman and Shane Warne. Some of the Bradman and Warne chapters in particular seem to have very little to do with the ashes. The story also follows a very aussie-centric perspective especially the further you progress into the book and I for one would have preferred a more balanced approach.

Overall cricket lovers with find enough here to keep them interested but a greater focus and a more balanced approach would have made a better read. 6.75/10,
Posted by Craig at 12:06 AM No comments:

All things considered Harry Dresden has had a surprisingly quiet year. Of course Dresden and quiet aren't known to go together so that quickly changes. Harry is attacked at the Carpenter's home by a group of Gruff's, goat-like enforcers from the summer court. The reason for this attack becomes apparent when Queen Mab of the winter court appears and announces that she is cashing in one of the favors Harry owes her. It seems Chicago crime boss John Marcone has been kidnapped and Mab wants him rescued. For unknown reasons Summer don't want this to happen. Meanwhile Sergeant Karin Murphy calls Dresden on a rather peculiar case; a large building has been cut in half by magic. As always Harry soon finds himself in bigger trouble.

There is a lot going on in this book with a number of competing factions all with their own agendas. Things could quite easily have got too chaotic to follow but Butcher does a great job in keeping everything well mapped out. The big stand out for me was that Butcher has improved a lot at keeping twists hidden until the moment he springs them out on the unsuspecting reader.

If you have come this far you know by now what to expect from a Dresden novel and Butcher delivers yet again. 8.5/10.
Posted by Craig at 7:18 PM No comments:

Nathan Rook is a man who deals in information. When a contact offers to sell him an ancient coffin, complete with a living breathing woman inside he knows he may have stumbled across the greatest discovery ever or possibly the greatest hoax. Everything about the woman's appearance indicates she is the Messiah and when she awakes she demonstrates incredible magical abilities. However she has no memories and doesn't believe she is the Messiah. Rook vows to help her and also realizes that, Messiah or not, she can be used as incredibly dangerous tool in the wrong hands.

Tryss, daughter of the queen, finds herself in the unenviable position of being used as a political tool by her mother. Her mother wishes to create a lasting peace by marrying off her daughter to the son of a prominent politician. Tryss has no interest in politics but initially goes along with it, until her fiance attempts to rape her. She is intent on escaping by any means necessary even if it means accepting the help of a shady senator.

First things first I have never come across such a perfectly hidden and brilliantly effected twist ever and the author needs to be commended. The world Stalbaum introduces is an interesting mix blend of science fiction and fantasy elements. I have seen enough to be intrigued but the story is very focused throughout the book so we miss fully exploring it. This is by no means a bad thing and leads to good pacing but I hope to see a bit more of the world and cultures in future installments.

The characters themselves are fully realized and easy to sympathize with and 'screen' time is split well enough to see them all develop.

Overall I absolutely loved the concept and I have never seen a twist pulled off quite so well. 8.5/10.
Posted by Craig at 1:04 AM No comments:

Review: The Neon Court:Or, The Betrayal of Matthew Swift by Kate Griffin Midnight Mayor Matthew swift is summoned bodily by magic to a burning tower. There he finds Oda, warrior of the order, who has what should be a fatal chest wound and has a strange habit of now saying "we" when she means "I." In the confusion of escaping the tower Oda kills a Daimyo of the Neon Court who attacks Swift and Oda. The Neon Court believes their ancient enemy the tribe is responsible and Lady Neon comes to London demanding Swift's help in the coming war.

The story starts out at a breakneck pace but Griffin is able to manage the pacing very well interspersing the action scenes with a decent amount of downtime in which the characters really develop. I particularly enjoyed the exploration of of Swift's relationship with his apprentice Penny and his employee Dees. An employer-employee relationship is not exactly typical fare for fantasy but that's what makes it interesting.

Griffin once again does all the things she has done so right in previous installments. The Urban magic concept is still fresh and innovative. The banter of Swift (particularly with Penny in this one) is entertaining without being distracting.

My main concern before reading this one was the similarity of the structure of the first two installments. Griffin makes enough of a break from this to keep me satisfied.

Overall the Neon court once again demonstrates that Griffin is urban fantasy's best kept secret. 8.5/10.
Posted by Craig at 5:32 PM No comments:

Review: The Great Bazaar and other strories by Peter V. Brett 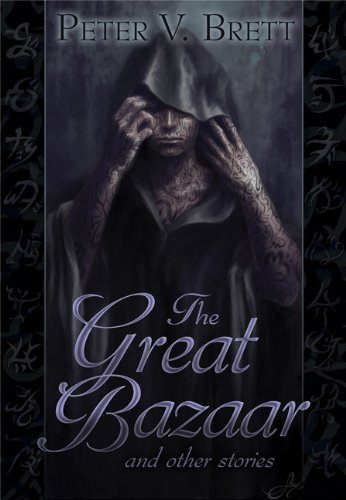 Whether this novella is great or a disappointment really depends on what you are expecting from it. If you are expecting a collection of self-contained short stories set in Brett's world than you are out of luck and in that the title is somewhat misleading.

The novella is made up of three main parts. The Great Bazaar is a short story set between chapters 16 and 17 of The Warded Man which explains how Arlen found the location of Anoch Sun. This takes up about two-thirds of the novella and is reasonably self-contained, acts as a bridge between the first and second novel (which focuses strongly on the desert setting) and has a nice twist at the end. Two deleted scenes follow, the first is would take place at the beginning of The Warded Man and is the first thing Brett actually wrote in this series and the other is a scene from Leesha's perspective. Brett does go into detail about why the scenes were cut so this is obviously of interest to people who are keen to see the writing process. It is similar to the extras Brandon Sanderson has on his website though Brett does not go into the same level of detail as Sanderson.

Overall I enjoyed this novella has it catered to a lot of things I'm interested in. Of course there is a valid argument that everything contained here could have just been put on Brett's website. If you are looking for an introduction to the series I would advise giving this one a miss and starting with very good The Warded Man. 7/10.
Posted by Craig at 7:44 PM No comments: After the pregnant Ariadne is spurned by Theseus in favor of her younger sister she sets about enacting her revenge. She strikes a deal with the shade of her murdered half-brother the minotaur Asterion and with their combined power they destroy the games, magical protection wards, of the Greek cities plunging the Mediterranean world into a downward spiral. Asterion is free to reincarnate himself as a result, however Ariadne left the game intact in one minor Greek city intending her descendents to recreate the game, betray Asterion and sieze power. Now hundreds of years later Ariadne's descendent Genvissa puts this plan into action. She appears to Brutus, heir to the Troy game, as Artemis and promises him power and the rebuilding of a new and better Troy in Llangarlia (in Britain). As part of her plan Genvissa sends Brutus to Mesopotama, the only city with an intact game, to test him. However Genvissa did not foresee Brutus taking the princess Cornelia forcefully as his wife and while Genvissa believes Asterion is netralized he may be able to make use of Cornelia for his own purposes.

The historic aspects of this novel are very well researched. The story itself has definte echoes of the style of a Greek tradegdy and works all the better for it. I found the concept of all of the disaters that occured in the hellenic world in this period being part of Ariadne's revenge a particularly interesring twist.

Douglas presents the characters in an interesting light casting none of them as heroes or villians of the piece, all having a somewhat reasonable agenda. Brutus and Cornelia and their dysfunctional relationship take centre stage and while both of them do rather despicable things Douglass does an excellent job of keeping sympathy for them. Cornelia's character develops very well throughout the novel and the descision to have some chapters told from her first person perspctive was a shrewd one.

Overall Douglass produces an interesting tale that will appeal to both fans of fantasy and historic fiction. 8.5/10.
Posted by Craig at 1:46 PM No comments: