With their options seemingly exhausted and Locke virtually on death's door due to poison Locke and Jean receive an  offer of assistance from a source they would never have expected, one of the Bondsmagi. The Bondsmagi in question, Patience, is willing to heal Locke in exchange for the gentlemen bastards' aid in rigging an election in the city of Karthain. However the opposition have an interesting cats-paw of their own, Sabetha Belacross Locke's former lover and someone whose skills are a match for his own.

The story is divided into two main parts; the events in the present and events in the past detailing Locke's first meeting with Sabetha, interesting turning points in their relationship before detailing efforts of the teenage gentleman bastards to stage a play while juggling an overbearing patron and other obstacles. One advantage to this strategy is Lynch gets to use some interesting characters such as father Chains and Calo and Galdo who were killed in earlier books. There is however a major drawback which I will come back to.

The book starts with a roar and hiss but runs out of steam in the middle and never really recovers. Part of this is due to a lack of tension. Sabetha obviously has no intention of doing serious harm to Locke and Jean and we know that the main characters are under no threat in the past storyline, ie the major drawback. Part of this could have been alleviated by focusing more on the conflict between the two Bondsmagi factions as this is clearly a major plot point but an underdeveloped one.

Having said that the characters remain engaging and there is an interesting touch of world-building which hints at the direction this series will take.

While there are some pacing issues and a serious lack of tension strong characters make for a worthwhile read. 7/10.
Posted by Craig at 9:00 PM No comments: 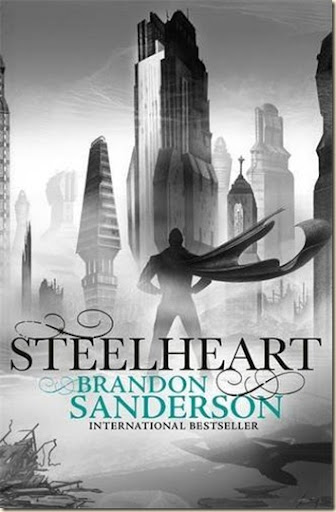 Ten years ago a cosmic event named calamity occurred. This burst of energy gave a select group of men and women, now called epics, extraordinary powers. However instead of using these abilities for the betterment of mankind the epics seized power for themselves. David is a young man bent on revenge. Ten years ago he watched Steelheart, the epic who rules what was once Chicago and is said to be invincible, murder his father.  However David has seen something no one else alive has, he has seen Steelheart bleed. David begins a search for the Reckoners, a shadowy group who fight the epics, although only some of the low level ones. He hopes he can convince them to help him against Steelheart and gain his vengeance.

One aspect of writing that Sanderson often has trouble with is humour and this is really evident in this novel. David is meant to be consumed by the need for vengeance in a dystopian world but is seemingly obsessed with random metaphors. This is really distracting in the first half of the book and doesn't sit well with the subject matter. Thankfully this eases once the action picks up later in the book.

I noticed in The Rithmatist, Brandon's other young adult novel, that the protagonist seemed younger than he should have and that is also the case for David here and is something Sanderson needs to address.

Sanderson is well known for his well thought out and exceedingly well organized magic systems. What he delivers in Steelheart is very out of character. The weaknesses for the epics are especially arbitrary and I hope he addresses this later in the series.

Having said all of that Sanderson does work some very well shadowed plot twists into the mix and the group of support characters is very well realized.

Overall Steelheart is a book of two halves with a problem riddled beginning and an action packed conclusion. 7/10.
Posted by Craig at 8:50 PM No comments: Following Gaius Sextus' death and the destruction of the capital of Alera the remaining legions of Alera attempt to regroup as the hordes of the Vord continue to advance. With no other option they decide to retreat to the Calderon valley, where count Bernard and his wife Amara have been preparing for the invasion for years. Meanwhile Gauis Octavian, aka Tavi, as arrives back in Alera with his makeshift forces of Aleran's and Canim and enacts a desperate plan to arrive to the battlefield in time to make a difference.

I can't help but thinking that Butcher wrote himself into a bit of corner in this final volume. It is without a doubt an action packed novel which relentless pace never lets up. However that is not necessarily a good thing and the character development, especially for the main cast, suffers as a result.


There are however two support characters where Butcher does succeed. There was a very well worked juxtaposition between Fidelias (alias Valiar Marcus) and Lady Aquitaine who have been antagonists at various parts in the series. Both have an opportunity for redemption and their stories work out very differently.

One constant throughout the series is that Tavi has always tried to come to an understanding with the enemies of Alera. With the Vord queen showing signs of very real intelligence and a yearning to understand some aspects of the Alerans for Tavi not to make an attempt to reason with her seems grossly out of character.

Overall the final volume of the Codex Alera series is a bit of a mixed bag. There is non-stop action but the good character growth in a couple of support characters is not echoed in the main cast. 7/10.
Posted by Craig at 1:09 PM No comments: