Overall Hines combines a well though out concept and delivers a balanced and enjoyable read. 8/10.
Posted by Craig at 10:52 PM No comments:

Review: Guns of the Dawn by Adrian Tchiakovsky 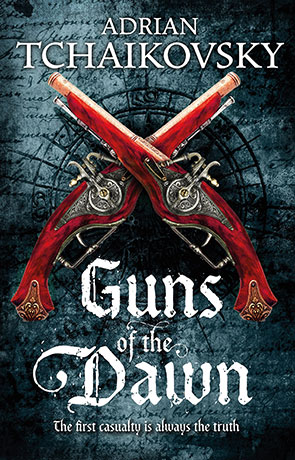 The two allied countries of Denland and Lascanne find themselves at war after the assassination of the king of Denland. Denland becomes a republic and can't have a working monarchy on their doorstep as it undermines their political position. Emily Marchwic is head of a noble house that has steadily declined after her father committed suicide years before. The man she blames for her father's death Mr Northway is the governor of their town and when he refuses to use his powers to prevent her fifteen year old brother from being sent to the front she hates him even more. However as she struggles to keep her family together she begins to understand he may not entirely be the villain she sees shes him as. When an announcement is made that each household must supply one woman for the front Emily volunteers herself, despite Mr Northway's efforts to save her. There she finds that the war and the fabric of her society itself may not be exactly what she has always been told.

What immediately impressed me with this book is the tone, reminiscent of something like the American civil war, that Tchiakovsky is able to capture. It is highly immersive and very different to that in his Shadows of the Apt  series. Emily is a convincing lead who grows as a character throughout the story. Supporting her are a complex cast of well-drawn supporting characters.

World-building is impressive without being intrusive, the action sequences infused with suspense all leading to a very satisfying conclusion.

Overall Tchaikovsky's first foray into stand-alone work is an impressive one. 9/10.
Posted by Craig at 10:50 PM No comments: