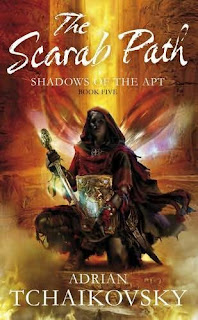 With the war with the Wasp empire behind them Collegium begins to take an interest in the wider world. Stenwold however believes it is inevitable that the war will begin again. In order to ensure that one of the masters sympathetic to his cause gains the speakers podium he agrees to throw his backing behind an expedition to the fabled city of Khanaphes, sending his niece Cheerwell as an ambassador. Che is crippled in ways no doctor can mend, having become inapt as a result of being connected to Achaeos when the moths enacted their ritual. As a result she can no longer understand the technology of her Kinden. She also finds herself haunted by Achaeos' ghost. Meanwhile Empress Seda has consolidated her power within the empire. Tharlric finds himself trapped, horrified by the empress' strange practices; he jumps at the chance to lead a wasp exhibition to Khanaphes. However someone very high up in the empire wants him dead.

Thalric and Totho have always been the most complex characters in the series and with both taking a centre stage in this book the character development is exceptionally good. Tharlric is a man divided against himself. His beliefs and very self-perceptions have been shattered and he struggles to find out who he really is. Totho still longs for Che's approval but struggles with self-loathing for his actions during the war. Che also grows considerably in this volume and it was interesting seeing her being truly caught between the worlds of apt and inapt.

The world building takes several steps forwards as well with some tantalizing hints given about the history of the world.

Tchaikovsky has a gift for writing large-scale battles and outdoes himself here again.

Overall very strong character-development and first-class world building combine to take this series to the next level. 9/10.

The Garden: A technician confronts a rogue AI who has taken the directive to create a paradise a touch too literally. It's a concept that has been done countless times and this story doesn't really take it in any new directions. The mini twist was well done but there is not a great deal of character development allowed in this short piece and it felt unfinished. 6/10.

Every so often: A man is sent back in time to protect a child Adolf Hitler from other time travellers. Very interesting concepts raised in this story. Larson is able to successfully demonstrate the weariness of the protagonist and the doubts of one man who will never know if doing his job successfully will make a difference. 8/10.

Memory Cathedrals: A star soccer player whose career was cut short by injury sells his memories to up and coming players. An original and engaging concept but I would have liked to see it given more time to develop. 7.5/10.

Loopholes: A wealthy murderer finds a loophole to dodge the justice system but the homicide detective assigned to the case finds a loophole of his own. By far strongest story in the collection. The protagonist is interesting and well-drawn, the concept is great and it has a strong conclusion. 8.5/10.

Back so Soon: A bored business woman gets more than she bargained for when a fling with a shell-shocked colonist. Very clever twist. 8/10.

Factory Man: In a world where corpses are reprogramed and put to work a young man confronts the corpse of his abusive father. Interesting concept but a wasted opportunity. This piece feels unfinished and there was so much potential for character development that was missed. 6/10.

Datafall: A young boy and his father are excited when the cloud appears and they have temporary internet access. A clever concept but doesn't go too far. 6.5/10.

Overall there some very good pieces in this collection but also a few that could have been developed further. 7.25/10.

Short Story Review: Even Hand by Jim Butcher in Dark and Stormy Knights

John Marcone, mob boss of Chicago, should know better. Justine, the assistant for Laura Raith and sometimes ally of Harry Dresden, turns up at his door asking for his protection with Mag a cantrev lord with considerable magical abilities hot on her trail. But a child's safety is at risk and Marcone can't say no. Besides the situation also gives him the opportunity to test a trap he has been developing to kill a certain wizard....

The opening is very clever beginning with a narration very similar to that of usual protagonist Harry Dresden but involving actions we would not expect from Dresden before revealing that it is in fact Marcone. Marcone's character is interesting and we get to see all sides of him including the humanitarian. I did enjoy the fact that by the end of the story though Butcher has firmly re-established that he is a threat to Dresden and dances to the beat of his own drum. Having henchman Hendricks shown in a very different light to the simple thug Dresden considers him was refreshing and a good comment on perceptions. I especially liked the comment that he is working on his thesis.

Overall Even Hand is an interesting character study and will appeal to all Dresnden readers. 8/10.

Alyssa Matthews is a somewhat sceptical paranormal investigator, whose work is the centre of her life. When investigating a cold file case of spontaneous human combustion things take a turn for the stranger. She begins to realize that the subject of investigation may have been dabbling with forces beyond his ken and may tie in with some disturbing dreams she has been plagued by. Or she could simply be losing her grip on her reality as her concerned best friend Greg seems to believe.

I was intrigued and drawn to the concept and still believe there is a good story here trying to break out but is let down badly by some mediocre writing. The sentences are overlong, drawn out far too much by unnecessary comas that break up any sort of flow. This is less prevalent in the novel’s second half which is encouraging but by then the damage had been done. Extra time editing would have helped.

There are some major problems of 'telling not showing' throughout, even going so far as to switch character point of views for a few sentences to do this. Pacing is very uneven with most of the first half of the novel involving Greg trying to convince Alyssa that she is simply overworked and letting her imagination run away with her. The second half then takes a different turn and feels rushed, though there was some promising world-building going on that had me intrigued.

Overall I like the concept, I really do, but the pacing and writing in general are a let-down. 5/10.

Doroga and Kitai of the Marat learn that the mysterious creature they encountered at the wax forest was in fact a Vord queen. The vord are an ancient enemy who always threaten to consume everything in their path. The nest of Vord divides three ways and at great cost the Marat are able to destroy one. When they realize that the queen herself is on Tavi's trail Kitai is despatched to watch over him and Doroga travels to the Calderon valley to warn Amara, Bernard and Isana. Meanwhile Tavi has problems of his own. A mysterious attack from across the sea has left the First Lord comatose and Tavi has to ensure that his political rivals do not learn of the situation or the realm could be thrown into a bloody civil war.

The story is roughly divided into two; what is happening in the Calderon Valley and what is happening at Alera Imperia. The first is more an out and out war story and the latter more political espionage. This was a clever split and gave a different flavour to proceedings.

The world-building is decidedly mixed. There are some interesting revelations about the Marat and the Vord, the introduction of a race of wolf-like creatures known as Canes and hints at more of the wider world. I was however disappointed at the lack of description of Alera Imperia and it is difficult to get any sort of feel for the capital.

Pacing is fluid throughout and Butcher's is exceptionally adept at writing frantic battle scenes. Character wise there are some interesting developments that hint at a layer of complexity, especially for Isana and Fidelias. These are however are kept largely in the background and I would have liked to see them pursued further.

Overall Butcher delivers are well-paced novel with some of the better battle scenes I've read in some time, I would have still liked to have seen a bit more in terms of character development and world-building. 7.75/10. 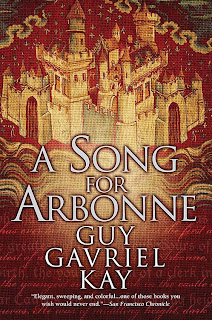