Despite having fought off the Bionese invading fleet, Rol Cortishane knows in his heart that it is only a matter of time before the pirate sanctuary of Ganesh Ka is destroyed. When an old and unwelcome acquaintance the former thief king Canker shows up  things get worse. Canker has been working for Rol's half sister and former lover Rowan as she tries to take back the throne that was stolen from her father. However things have not gone well and Rowan is besieged in the capital she has taken and needs Rol's help. Rol is reluctant to return to his former life but is put into a position where he has little choice.

Overall Kearney continues to deliver and show just why he is the most under-appreciated and under-read writers in the genre. 8.5/10.
Posted by Craig at 8:25 PM No comments: 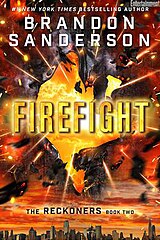 After the events of Steelheart a number of epics have descended on Newcargo attempting to kill members of the Reckoners. What these epics all have in common is that they are from Babilar (formerly New York City) under the command of a high epic Regalia's, who has a connection with Prof, command. Prof decides to take Tia and David to Babilar to meet up with the Reckoners cell based there and put a stop to her. David meanwhile has plans of his own. Knowing Megan is in Babilar as well he wants to find her and prove that epics can fight their nature. A plan that looks like immediately unraveling when Megan is blamed for the death of a Reckoner.

Like the previous book I have massive issues with David as a character. Despite watching his father murdered by Steelheart and watching his world destroyed by epics he is a goofball obsessed with silly metaphors. A couple of the other Reckoners in the New York cell suffer from similar deficiencies.

Sanderson's two biggest problems as a writer are a very real struggle with humour and writing down to an audience when he is writing Young Adult. In this genre his protagonists tend to seem younger then they are and I wish he would have read through his Mistborn books again, Vin was a very believable and well fleshed out protagonist despite being in her teens.

Once the action heats up about halfway through the book, these problems thankfully are less evident. I'm also glad the weaknesses of epics are looked at further and are no longer so arbitrary.

Overall Sanderson's struggle with humour and the Young Adult genre continue and detract from a very interesting concept. 6/10.