Shai is a forger, blessed with the ability to recreate items by changing their history. When a heist to steal the emperor's sceptre goes wrong she finds herself in prison awaiting execution. However the arbiters, a group of five powerful individuals who form an advisory council to the emperor, need her help. An assassination attempt has left the empress dead and broken the emperor’s mind. The arbiters want Shai to reforge the emperor’s soul, even though they consider what she does an abomination, and she has only three months to do it. Shai however is no fool and realizes that even if she succeeds the arbiters do not want a witness to the events.

Despite working in a much shorter medium than is considered his forte Sanderson uses a few innovative ideas to really make this piece work. The Characterization is very focussed. The crux of the story is the interaction between Shai and the most noble of the arbiters Gaotona. Both are strong characters but do have some flaws that dog their interaction, for example Gaotona can be quite narrow minded when it comes to things outside his own experiences. Both characters benefit from their exposure to the others point of view. This interaction, specifically Gaotona’s attempt to understand what Shai is doing, between the two main characters allows Brandon to go into detail about the magic system without the feeling of 'info-dumping'. Add to this a third character; the emperor, who we learn about from Shai's research to rebuild his soul, quite a novel way of seeing a character brought to life.

Chapters are divided into different days in a kind of countdown of Shai's allotted three months. This really worked well for me infusing a sense of tension in the piece that is otherwise lacking action for the majority of the story. Despite having most of the story taking place in a single location, Shai's room, Sanderson does an excellent job of world-building by looking at the interactions of characters who hail from different locations within the empire. 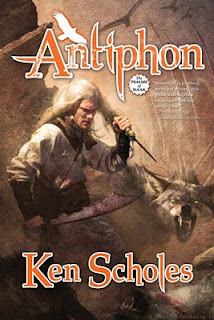