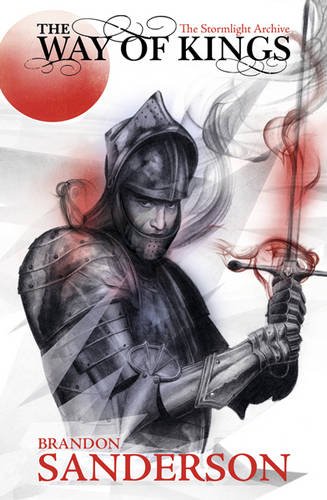 Years ago King Galivar of Alethkar was assassinated; plunging the kingdom into a war of vengeance on a ruined landscape called the Shattered Plains. Here the various princes fight separately against the same foe, more interested in securing gem hearts and their own personal glory than in winning the war. Bright lord Dalinar Kohlin, brother of the late king, grows increasingly frustrated with this situation and is troubled by his brother's dying words that have pointed him towards an obscure text called the Way of Kings. What's more during high storms Dalinar is plagued by visions that have him doubting his own sanity. Kaladin, a slave who has recently been brought to the shattered plains, finds himself assigned to a bridge crew whose sole purpose is to run bridges to a battlefield and draw enemy fire. Haunted by past failures Kaladin is caught on a knife edge of either giving up or trying one last time to aid those around him. Meanwhile a young woman named Shallan is seeking to train under an enigmatic scholar called Jasnah who also happens to be the king's sister. Her motives are less than pure as she plans a daring theft to steal an object of magical power, her only hope to save her troubled family.

Sanderson has really put a lot of effort into building a believable planet in Roshar with a deep history and it really shows. Lashed by periodic storms the creatures and plant life have evolved to survive the harsh conditions. Sanderson describes these in exquisite detail and is aided by illustrations taken from Shallan's drawing book. One of the most interesting creatures are called Spren and are drawn to different types of emotions and phenomena. The history in question is deep and we only scratch the surface in the opening novel.

The action is told primarily through the three protagonists point of view but there are various interludes from other characters that are set to feature in subsequent novels. Sanderson captures the inner turmoil of Dalinar and Kaladin brilliantly and while I found Shallan slightly harder to relate to I believe he did a good job in portraying her naivety. The structure tends to have alternating chapters from two of the story lines at a time with the other taking a back seat. Sanderson seems to have done this as an alternative to what he has seen in other longer series like the Wheel of Time. While I do feel that this structure should be given more of a chance I am less than convinced with it's effectivness and found myself constantly wondering what was occurring in the storyline currently sitting out. Although a number of plotlines are naturally left unresolved there are definite conclusions to arcs introduced for each of the three protagonists. There has been a bit of debate around the character's morality, namely whether they are either black or white or fit into shades of grey. My own take is that the three main protagonists are all morally good (even Shallan), though some minor characters are definitely in grey territory. Most notably Dalinar's chief rival Sadeas who is certainly more than a simple villain and a character that intrigued me.

Anyone who has read any of Brandon's work before will know that most of his books are set in the same universe with a recurring character named Hoid making sporadic appearances. Hoid is here again and features far more prominently than before even having a chapter told from his perspective. As always Brandon has some well thought out magic systems in play. Though they are less well defined and understood than in his previous work, partly due to the characters lack of knowledge and partly due to this being a longer series and I'm sure all will be revealed in time.

Overall Way of Kings is a solid opening to one of the most ambitious fantasy series in decades. 8.25/10.
Posted by Craig at 1:31 PM