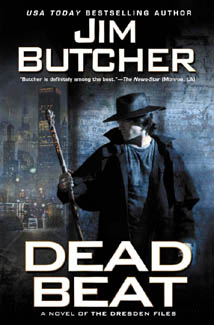 Harry is not in the best of spaces right now. He is still having trouble getting used to his crippled hand and his half-vampire half-brother Thomas has issues of his own which he won’t share. What’s worse is that Karrin Murphy, Harry’s best friend and potential love interest, is off to Hawaii for a romantic getaway with a dangerous mercenary named Kincaid and Harry is stuck watering her plants. Things only go down hill when uber-vampire Marva threatens to destroy Murphy’s reputation unless Harry helps her retrieve a mystical book known as the word of Kemmler, a book which several powerful necromancers are determined to find as well.

What’s really evident in this book is how all the stuff Harry has been through is beginning to take it’s toll on him and Butcher really captures Harry's fatigue and frustration well. Harry is afraid to draw on his fire magic after the damage done to his hand and the people around Harry are beginning to notice that something isn’t quite right with him. Robbed of his usual assistance from Murphy, Harry finds aid from the unlikely source of a middle-aged polka playing mortician named Butters, whose character also develops interestingly, if slightly predictably, throughout the book. Lasciel, the fallen angel who gained a foothold in Harry’s mind by him
picking up the Roman coin she is housed in, also features prominently and is bound to play an even larger role in future installments. The way she subtly tries to tempt Harry is masterfully done.

Overall Dead Beat is another solid instalment in the Dresden files. 8.25/10
Posted by Craig at 7:26 PM