Review: Tome of the Undergates by Sam Sykes 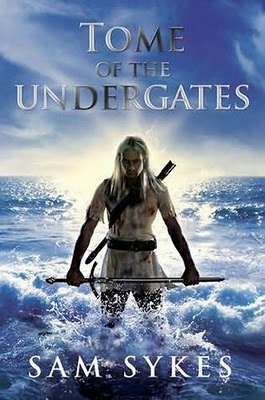 Lenk is a man with his fair share of problems. He is short, his hair has already turned white despite his youth and he is an adventurer; a profession despised everywhere. Not just an adventurer but the leader of a band of adventurer’s who all seem intent on killing each other. The band in question's latest job is escorting an esteemed clergyman, easy enough until a band of eloquent pirates attacks the ship they're on. Even the pirates are confused when a band of fishmen led by a strange demon steal a tome from the priest. Not just any tome but one with the power of releasing demons back onto the earth. After some negotiation Lenk and his band are charged with retrieving the tome from the seemingly invulnerable demon. To top it all off Lenk is beginning to hear a voice in his head telling him to kill...

After the first chapter I began to wonder if this would work; the byplay with the rather eloquent pirates and the infighting between Lenk's companions was interesting but seemed a bit over the top. Could Sykes flesh out his characters and make them more believable? The answer is a resounding yes and the development of the characters is definitely Sykes strong suite and the real focus of the book, which helps when the plot does get a bit over the top. All of Lenk's band has some really strong personal issues that Sykes works through and all are well done. Well all of them except for the possible exception of the priestess Asper. Given the revelations that are presented later in the book I would have liked to have seen this shadowed earlier on as it didn't quite gel for me.

The World building aspect was a bit erratic. While I am intrigued by the non-human races introduced I found it odd that the some of the more educated members of the band didn't know the Rega are virtually extinct.

Pacing is an issue Sykes has come in for criticism for, though I feel this is largely unfounded. While the initial confrontation on the ship did take up a around 160 pages what many reviewers have failed to note is that the font size is large, making it closer to about 70-80 odd pages in an average book. More importantly not once did I feel this section dragged. The last part of the book on the other hand could have been culled a bit.

Overall Sykes has produced a strong debut, with some interesting characters that develop interestingly across the book. I hope he fleshes out the world a bit more in subsequent books. 7.25/10.
Posted by Craig at 2:30 AM