Review: Three if by Air by Patrick Koepke 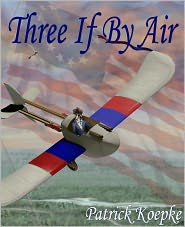 Nathaniel Hewitt is a young man living in Boston during the American War of Independence. After he is caught up in the Boston Massacre Nathaniel becomes a firmer believer in American independence, four years later he travels to the first Continental congress where he falls in love with Constance Whitegate daughter of a adamant loyalist. When war breaks out Nathaniel joins the local militia, all the while still corresponding with Constance. When the Americans begin to build their own air fleet Nathaniel jumps at the opportunity to join despite the fact that they are outclassed and outnumbered by their British counterparts.

The story has two main elements; a romantic element with Nathanial and Constance' forbidden love and an alternative history/fantasy element. Koepke does a good job in balancing the two. Naturally comparisons will be made to Naomi Novik's work and like Novik, Koepke does an excellent job in matching the narrative to the time period concerned.

I really enjoyed the way the author incorporated the gliders into the story. The way they function is well thought out and explained and fits rather seamlessly within the time period. The gliders are incorporated well without overly dominating, having very definite sets of strengths and weaknesses.

Both major protagonists are well considered and believable. My only minor grip is that I would have liked to have seen some of the supporting characters fleshed out a bit more.

Overall a very interesting and entertaining read. 8/10.
Posted by Craig at 10:47 PM