Review:Kitty and the Midnight Hour by Carrie Vaughn 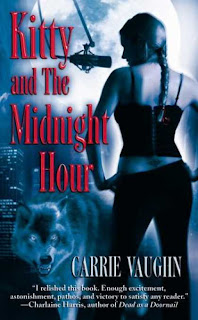 Kitty Norville is a midnight-shift DJ for a small Denver radio station who has adjusted to life as a werewolf. However her life changes drastically when she inadvertently changes her show into a late-night advice show for the paranormal. This causes all sorts of problems when members of her own pack and the local vampire family believe she has overstepped her bounds and decide to do something about it. A local police officer also decides to enlist Kitty's help after a string of murders. Has Kitty bitten off more than she can chew?

At the crux this is a book about juxtapositions. As a character Kitty is at a point in her life when she is willing to risk striking out on her own but isn't sure if she wants to lose her position in her pack. She is also trying to balance her human nature with the beast within. This makes an interesting dynamic for Kitty as a character and is mirrored in a lot of the support characters, for example Kitty's friend TJ is often torn between his loyalty to the pack and his loyalty to Kitty and within wider concerns that are introduced such as whether  pack or family disputes should be dealt with by local law enforcement.

The world Norville introduces is interesting and she certainly includes a number of issues that will be resolved in later books while ensuring that there is enough closure for a few plotlines in this volume. The pacing is quick but well controlled throughout. Though the speed of some things like the acceptance that the wider community has for the paranormal and Kitty's relationship with were-wolf hunter Cormac felt too rushed to be believable.

Overall Kitty is an interesting and complex character backed up strong backup cast. The pacing is strong though the speed introduces a few minor issues. 8/10.
Posted by Craig at 12:55 AM