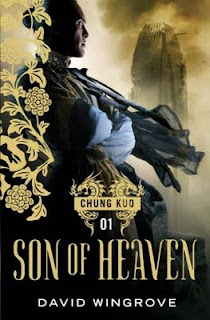 In the year 2065 the residents of rural Dorset eke out a living in a world vastly changed after a catastrophic economic collapse twenty years earlier that destroyed state-level governments. A feeling of dread that nobody can quite place begins to take hold. Strange airships appear over the countryside and only Jake Reed realizes what this means. Before the collapse he was a highly placed futures broker and saw first-hand that the collapse was started by the Chinese. He realizes that they are now taking the next steps in their master plan.

The book is divided in two main parts the first concentrating on Jake Reeds life with his son and neighbours in Dorset and the second years earlier in London before the collapse detailing the events leading up to it. Wingrove creates a believable post-collapse world particularly with the organization and remnants of technology, i.e. after twenty years not everything would have disappeared. The characters are generally fleshed out nicely though I would have liked the motivations of the main antagonist, Wang explored more. He is the only character that comes across a bit one dimensional but this is mainly due to seeing him through his rival Jiang's perspective for the majority of his onscreen time.

Wingrove does focus a lot on contrasts, ie between pre and post-collapse society and western and eastern societies, though I can't help feeling that he missed a trick. Modern society is very multi-cultural and Britain’s ethnic population is both diverse and substantial. It would have been very interesting to see British people of Chinese descent’s reaction to the Chinese take over.

Pacing is well controlled throughout most of the novel with the exception for the finale which felt rushed. More time on the interaction between Jake and Jiang and the Chinese political situation would have been of benefit.

Overall a solid novel with impressive world-building a few missed tricks would have elevated it to a classic. 8/10.