Review: The Rithmatist by Brandon Sanderson 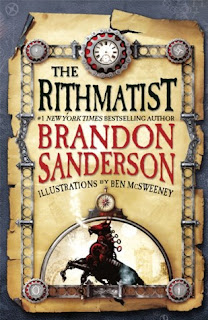 Joel attends one of the most elite schools in the country, Armedius Academy. Not only do the sons and daughters of influential politicians and the extremely wealthy attend but so do rithmatists, people with the gift to bring mathematically imbued chalk lines to life,  in training. However Joel is the son of a cleaning lady at the Academy and is only able to attend because the principal was friends with his deceased father, a chalk-maker. Joel wishes nothing more than to be a rithmatist and although he understands the theory better than most he lacks the gift. He tires to slip into their lectures at every opportunity and learn what he can. However he may learn more than he wanted to when young rithmatists start disappearing under mysterious circumstances and he is assigned as an aide to Professor Fitch a rithmatist investigating theses disappearances.

Sanderson is well known for his well developed magic systems and this novel is no exception. Rithmatics is a combination of a mathematical and chalk based magic that is brought to life by some clever diagrams that begin each chapter. This is well explained and interesting in its own right.

However the world-building itself was a highlight for me. Set in the the early 1900s in an alternative history earth where the United States in made up of a series of Isles separated by a shallow sea. Europe was slowly taken over by an Asian civilization about a hundred years before and the Aztecs remain a power in South America. Technology is based on a gear-punk setting as well. All very fascinating and makes for an original backdrop.

Pacing was well controlled and I enjoyed the 'mystery' format Sanderson incorporated.

Characterization is generally good but is also the area I had a few issues. Some of the support characters are heavily overemphasized products of their environments, Harding being the biggest example of this. This seems more reminiscent of middle-grade work than young adult. Also Joel seems to act younger than his sixteen years in places in the narrative.

Overall a solid effort, with a very good magic system, world-building and pacing. Adapting characterization to YA could do with a bit of work though. 8/10.
Posted by Craig at 5:12 PM