Review: The Redemption of Althalus by David and Leigh Eddings 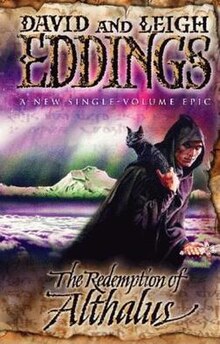 Athalus is a talented bronze-age who has gone through an extended spell of bad luck. In desperation he accepts  a job from Ghend, a shady-figure who wants Athalus to steal a book from a house at the edge of the world. Athalus finds himself trapped in the house and is befriended by a talking cat who is more than she seems. Soon Athalus realizes he is caught up in clash between the gods themselves with the fate of the world at stake.

The main characters all have that certain charm (aside from the villains who are one-dimensional) that all Eddings' characters share, though as usual I find the shared sense of humour is a bit hard to accept. Pacing is a real struggle with lots of repetition of events whenever a new character is introduced. This leads into another issue of too much telling rather than showing the reader. The biggest issue was a lack of tension throughout the novel as the villains are so incompetent it is impossible to believe they could actually succeed.

Overall this novel suffers from some major pacing and character issues which made it a slog to get through it. 5/10.
Posted by Craig at 9:32 PM