Review: Alcatraz Versus The Knights of Crystallia by Brandon Sanderson 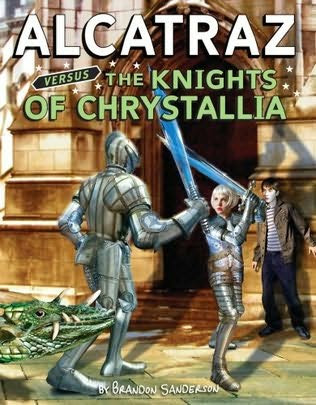 Following on from their adventure at the library of Alexandria Alcatraz and co arrive in the free kingdom city of Crystallia to a major shock; The high king is in the middle of peace negotiations with the librarians and it looks increasingly likely that the kingdom of Mokia, home to a good friend of Alcatraz, will be abandoned to face the Librarians on their own. Meanwhile Bastille has been stripped of her armour and her knighthood might soon follow. Suspecting a librarian trick Alcatraz sets about investigating.

The first two Alcatraz books were largely set in our world so it is certainly interesting to get a firsthand look into the free kingdoms, which is filled with such wonders as dragon-taxis and where every building is a castle. Although all of that is weird and wonderful I was kind of hoping Sanderson might have fleshed out the world a touch more. The style of writing remains the same with Alcatraz addressing the reader firsthand but I felt the jokes weren't quite as good this time around and seemed slightly rushed. Also the character development of Alcatraz and Bastille which I was so impressed with in the previous book seemed to stall and didn't advance much. There were some enticing hints about where Alcatraz's relationship with his estranged parents might be going but these seem to have been left to a future book to explore further.

All in all Alcatraz Versus the Knights of Crystallia was another fun read though not quite as good as the previous two volumes. Funs of the series will no doubt enjoy it but I don't think it will win any new readers. I couldn't help feeling it was slightly rushed and at times felt like it was simply killing time to the next volumes. 7/10.
Posted by Craig at 11:05 PM