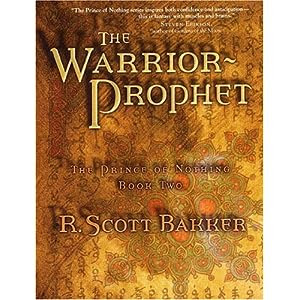 Following the events of the last book; the holy war now stands united and begins it's march against the heathen Fanim intent on liberating the holy city of Shimesh. Anasûrimbor Kellhus a Dunyain monk posing as a prince begins to make his move to take control of the holy war and bend it towards his own goal of finding his father. A goal made much easier by his training which enables him to read people and use their own passions to influence them. Kellhus asks Drusas Achamian, a mandate schoolman, to act as his teacher. Achamian is convinced that Kellhus is the harbinger of the second apocalypse and possibly mankind's last hope. The situation severally strains Achamian as he is caught between alerting his fellow schoolman or aiding Kellhus, either course could cause the doom of humanity. Kellhus' actions attract the attention of the consult who have their own plans for the holy war and exert influence through their skin spies who have replaced real soldiers and nobles and they decide that Kellhus needs to be removed.

As the title suggests Kelhus and his development into a messiah like figure is the crux of this novel and the plot line that the others all dance about. The preceding novel setup the characters and history of the world enough that the narrative moves very smoothly throughout this novel. All of the viewpoint characters, including dozens not named above, all have their own agendas and the intersection of these and the political maneuvering that ensues is fascinating. A number of large scale battles are fought as the holy war marches on and it is here where Bakker shines. These battles are told from a god-like perspective which almost makes the holy war seem like a character unto itself.

In sum all of the things Bakker did right in his debut he does again here and the quickened flow of the narrative makes this a touch better than it's predecessor. 8.75/10.
Posted by Craig at 7:13 PM