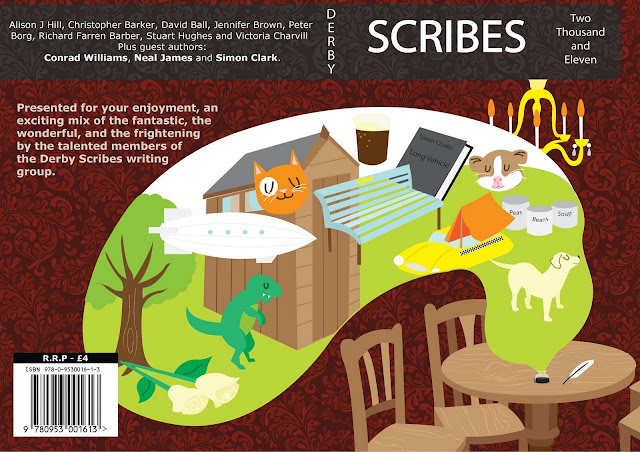 This Anthology is a collection of short stories of Derby Scribes members and supporters.

In The Spirit of Darwin by Simon Clark. Lloyd Jefferson meets Sir Charles Darwin who wants to harvest his mind. Original tale that certainly shines a light of hope on the human condition. 7/10.

Brylcreem and Pipe Tobacco by Simon Clark. Tale about a woman who seeks the approval of her dead husband before marrying again. It has a satisfying if somewhat predictable conclusion but the constant repetition of brylcream spoiled this one a bit for me. 5.75/10.

Stump by Victoria Charvill. Tale about a little girl whose pets keeping dying and a guinea pig she calls stump. Doesn't really go anywhere and felt too rushed. 5/10.

Leaving Jessica by Jennifer Brown. Tale about a woman forced to change identities or be found by the mob. Well written but needed a stronger conclusion. 6/10.

Last respects by Richard Farren Barber. Follows a man's experiences in the trenches during the second world war. Lovely imagery in this piece though the conclusion was a bit rushed. 7/10.

The Wake Up Call by Alison J Hill. A man tries to cover up a hit and run accident while he was drunk. Nice twist. 6/10.

The Gallery by Conrad Williams. Set in the future where reading is highly regulated and controlled and possessing any unsolicited texts will get you killed. Definitely the stand out piece for me. Williams builds an interesting and convincing world in a short space with very believable characters. 8.5/10.

Dave's Dinosaur by Peter Borg. Dave is awoken by his wife because a dinosaur is outside their tent. Borg has a strong writing style and voice but the story suffers due to having no clear conclusion. 6.5/10.

Obsolete by Christopher Barker. An old man who is under house arrest hatches a plan to escape. A nice solid piece, well structured. 7/10.

The Smell of Fear by Neal James. A group of puppies plan an ambush on the local bully. A little predictable. 6/10.

As whole the collection is a bit of a mixed bag with some really solid pieces and others that need some work. About half the stories suffered structurally with no real ending. 6.5/10.
Posted by Craig at 3:06 PM