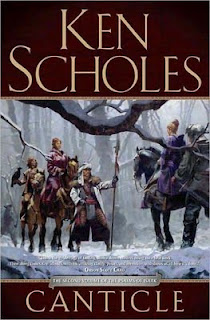 The birth of Rudolfo's son and heir to the Ninefold forest is imminent and several heads of state have converged to honour his first born child. During the feast a group of magicked assassins attack and kill several dignitaries including Hanric, the marsh queen’s shadow ruler. This forces young Winter to publicly take the throne. Rufolfo is inexplicably left untouched. Amid the turmoil Jin Li Tam gives birth to Jacob but the child is sickly, the result of the powders used to enable his conception. Rudolfo is left with no choice but to seek out Jin's father in hopes of a cure, a man he swore to kill when next they met. Meanwhile another metal man has arrived bearing news about a hidden library which stores all of the knowledge lost with Windwir's fall. Geb and Isaac are despatched to find it. Petronus and Li Tam are searching for an outside threat that they believe is responsible for Windwir's downfall, however people close to them may already be compromised.

Scholes does an excellent job of infusing an atmosphere of tension throughout the novel. I loved the frustration of the characters as they realized their choices were already anticipated by an overarching outside influence. Like the first novel Scholes’s pacing is spot on throughout and he uses multiple POV's shift and short sharp chapters to good effect. World-building is solid throughout as well without encroaching on the plot.

Overall Scholes certainly improves on his impressive debut. 8.5/10.
Posted by Craig at 12:54 AM