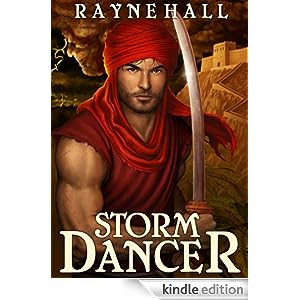 Dahoud is a former military commander who committed great atrocities, particularly against women, at the behest of djinn that shares his soul. He has been in hiding for years, working as a clerk and hoping to forget his past. When he is given an opportunity to become the satrap of a territory he hopes he can make up for all he has done. Merida is a weather magician who has recently become a diplomat to a land that doesn't believe in her skills. However when she brings rain she may have also brought a great deal of trouble for herself.

The first thing that I noticed about this novel is that the prose does not gel with the 'dark' fantasy setting the author was trying to create. It is rather simplistic and underdeveloped.

Most of the characters come across as highly naive. While this may suit Merida it certainly doesn't suit the rest of the cast.

The plot is highly unorganized and scampers all over the show. There is very little build up to important moments and it often seems to lack an overall vision.

There aren't quite enough typos to say the book was riddled with them but there are certainly enough to be distracting.

While the basic premise of Storm Dancer had potential, huge problems in the prose, character development and overall plot made it a chore to read. 3/10.