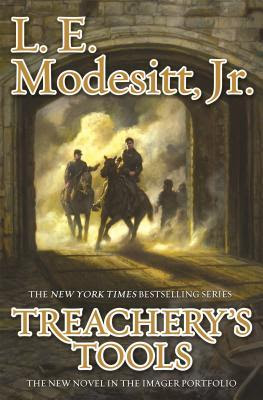 Alastar has settled well into role as Maitre of Colleguim. However the promise of a poor grain harvest exacerbates already existing problems between the Upper Class High Holders and the increasingly powerful merchant class. Alastar attempts to assist Solidar's barley competent rex to navigate through these problems but when someone begins assassinating students of the Colleguim he realizes a bigger game is afoot.

I found Alastar to be an engaging protagonist and thought his own struggles with a mid-life crisis added a very human element to him. The supporting cast are well-developed and the plot interesting and well-paced. World-building was subtly and effectively incorporated and I felt up to speed throughout despite never having read a Modesitt Jr book before and coming in mid-series.

Overall engaging characters and unobtrusive yet effective world-building make for a solid read. 8.25/10.
Posted by Craig at 12:25 AM