Review: Hawkwood and the Kings by Paul Kearney 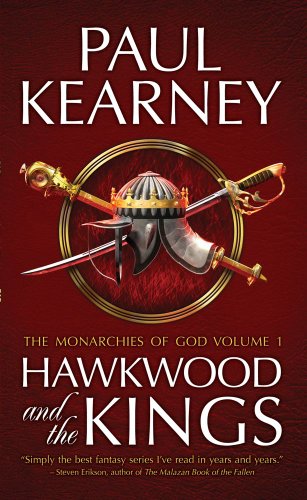 The holy city of Aekir has fallen to the Merduks. Instead of uniting against the threat the West begins to fracture. Prelate Himerias attempts to use the confusion to gain power for the church by leading purges of so-called heretics in Hebrion. King Abeleyn attempts to resist where he can be aligning with some of the other kings and implementing other measures. As part of these plans he authorizes his cousin to outfit an expedition across the great Western ocean where another continent may or may not exist. The expedition is led by Captain Richard Hawkwood, who has little choice but to take it to save his crew, and includes many magic-users among the passengers fleeing the purges. However there may be forces that do not wish them to find the continent.

The world building of Kearney is very impressive and the world he creates is like a shadow of our own. The Ramusian states are based on Christian Rome, the Merduks on the Muslim kingdoms and western continent on the Americas. The level of technology is a mix of medieval and more advanced elements including firearms.

Viewpoints are varied across the various factions and include an interesting cast of three-dimensional characters. Pacing is one of Kearney's real strong points and he is able to keep the story moving along nicely through some areas which could have really slowed things down, ie the voyage.