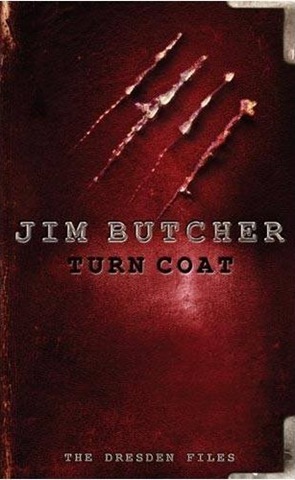 Donald Morgan, formerly his chief persecutor among the wardens and one of the warden's most powerful magicians, arrives on Harry Dresden's doorstep bleeding and barely conscious. Morgan explains that one of the members of the senior council Aleron LaFortier has been murdered. Morgan was found standing above his body with the bloody murder weapon in hand and was taken into custody and subsequently escaped. Morgan claims he is innocent. And as much as Harry may wish otherwise he believes Morgan and offers his help. Harry believes that there is a traitor among the wardens, one who has set Morgan up and wants to see the order destroyed. Harry also knows that be aiding Morgan his own life may be forfeit.

Turncoat is the eleventh book in the Dresden Files and I think if anyone has made it this far it is safe to say that they are a fan of Butcher's familiar formula. The characterization is what stood out for me the most in this installment. Harry seems to be a lot more emotionally mature than he once was and it is great to see that he has learned a lot from his past experiences. Dresden really uses his head to come up with some unexpected solutions to a few problems. A number of other characters including, Molly, Thomas and Billy also develop in some interesting ways. What impressed me thoroughly was that a number of catalysts for these developments occurred 'offscreen' but Butcher was still able to capture them perfectly.

All in all Butcher delivers another fast-paced and satisfying read. 8.25/10.
Posted by Craig at 1:30 PM