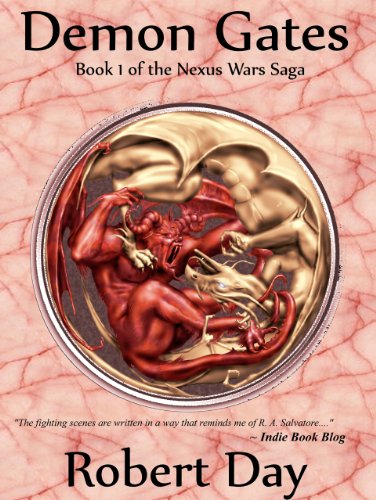 For hundreds of years the land of Kil'Tar has enjoyed a period of relative peace. Very few recall that the demonic Ashar'an invaded the world and were only drive back at great cost. Now the seals binding the portals between the two worlds are failing and mankind is ill suited to face this threat. In a backwater village of Shadowvale a young man named Valderion’s life is about to change and the fate of the world may rest in his hands.

Demon Gates is a throwback epic fantasy in the tradition of Feist, Eddings and Jordan. This is not necessarily a bad thing as long as it is not overly derivative. Day had me worried initially, Valderion lives with his father on an outlying farm, is friends with a blacksmith and his love interest is the mayor’s daughter. Valderion's father is also killed when their farm is attacked by trolls. That is way too similar to Jordan's Eye of the World for comfort but thankfully the similarities end there and Day gets on with telling his own story. Much of the tale focusses on Valderion's journey of self-discovery and Day does an excellent job of balancing this with a sprinkling of scenes keeping the larger story in the frame. The world of Kil'tar is an interesting one and Day does a great job of revealing its locations and rich history through Valderion's at times naive perspective.

Overall a promising debut to say the least. If the works of Jordan and Feist are your cup of tea you could do worse than give Demon Gates a read. 7.25/10.
Posted by Craig at 9:10 PM