Review: Blood of the Mantis by Adrian Tchaikovsky 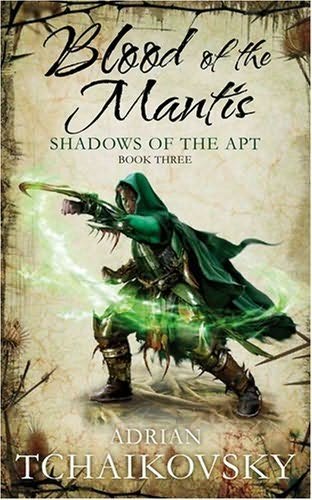 With the Wasp advance halted due to winter Stenwold takes the opportunity to send Nero and Che to Solnarno, a spider tribute city in the exalsee under wasp threat, hoping to warn them and gain allies. Meanwhile Achaeos, Tisamon , Tynisa and Thalric head to Jerez hoping to retrieve the stolen shadowbox. The wasps have agents of their own after the box as well. Stenwold hopes to try and solidify his allies against the wasp but the new snapbow may cause problems than it solves. .

Although a few other storylines are dipped into the three outlined above take centre stage throughout most of the book. This focus allows Tchaikovsky to more or less resolve them all by the end of the book, something I found immensely satisfying in the middle book of a series. While book two was more a war novel with large scale pitched battles this instalment returns to the roots of the first with a more espionage feel to it.

My only gripe would be the lack of any real character development in any of the major players. Tharlric and Totho took centre stage in this in the first two books respectively but no one else followed suit this time.

Overall a strong offering but I would like to see a bit more character development in the next book. 8/10.
Posted by Craig at 10:41 PM