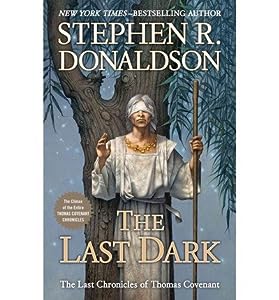 With the worm at world's end roused and seeking the to devour the Elohim the Land is plunged into a never ending twilight. With her adopted son Jeremiah finally free of his dissociation Linden Avery seeks to aid him in a desperate plan to build a refuge for the remaining Elohim and forestall the end of everything.  Meanwhile Thomas Covenant has finally put an end to his insane ex-wife's suffering and the inadvertent damage she was doing to the arch of time. Covenant is healed from his injury's by Brinn who tasks Covenant with protecting the Lurker against possession by a Raver. All three characters must face their greatest fears if the Land is to survive.

As one would hope in the concluding volume in a series plot lines are constantly being resolved throughout this novel. This set up a steady pace throughout which certainly kept me engaged.

As always the main strength of any Donaldson novel is the depth of his characters. Covenant, Linden and Jeremiah all get point of view chapters and Donaldson does an amazing job of showing the toll the strain of events takes on each of them. The cast of support characters are also exceptionally strong and well fleshed out.

Overall strong pacing and engaging characters make for a fitting finale for one of the cornerstone series in fantasy literature. 8.5/10.
Posted by Craig at 11:32 PM