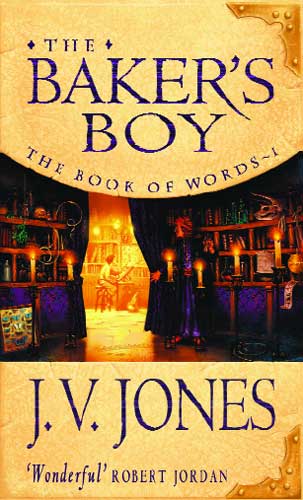 The king's chancellor and powerful sorcerer Baralis has been plotting for decades to rule the kingdom of Harvell and eventually create for himself an empire. He secretly fathered the heir Prince Kylock and is responsible for an injury to the king that leaves him unable to rule. Now Baralis turns his attentions to a former co-conspirator Lord Maybor who has plans of his own. Maybor wishes to have his daughter Melliandra marry Kylock and secure more power for himself. Something Baralis won't allow. Meanwhile an orphaned baker's apprentice Jack learns he may have powers of his own and must flee the castle that has been his home as Baralis will undoubtedly see him as a threat. Melliandra has no desire to wed Kylock and decides to run away herself.

A wiseman named Bevlin had foreseen events taking place in the present and had dispatched a young knight named Tawl on a vague quest to "find the boy". Tawl is imprisoned by the corrupt archbishop of Rorn. He is eventually released so the archbishop can try and figure out what he is up to. The archbishop also gets wind of Baralis' plans and is very uneasy about them.


At first glance the Baker's Boy might appear to be a combination of standard fantasy stereotypes. This is certainly not the case. What I found extremely refreshing is that the plot focussed on the three villians, Baralis, Maybor and the archbishop and their plots as well as how they play spoiler to the  three heroes. However I did have some trouble with the characterization for the three as they are all too much like stereotypical villains and can lack a degree of complexity. For example the archbishop is portrayed as glutton in almost every scene he appears in and they all seem to suffer from an unrealistic overconfidence. Oddly enough the only villain who doesnt seem to fall into this trap is Baralis assisant and I'm curious to see how he develops.

Pacing is very well controlled and the world-building is interesting as well.

Overall I enjoyed the different approach by focusing on the villains' various schemes but bit more complexity in their characterization would have been a great touch. 7.5/10.