Review: Daughter of Regals and Other Tales by Stephen R. Donaldson 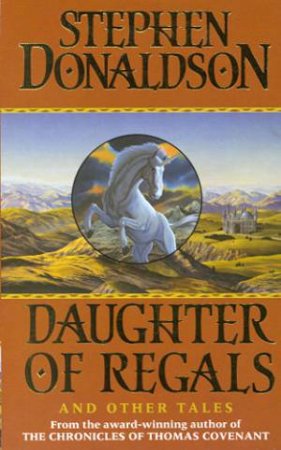 Daughter of Regals:  Princess Chrysalis decides to try and take hold of her birthright and become a magical creature on her twenty -first birthday.If she fails he life may be forfeit as the three leading nobles will look to take control and plunge the kingdom into war. Whats-more her magical protector is dubious about her chances and may have plans of his own to keep the kingdom intact. Superb world-building and well fleshed out support characters. I enjoyed the dichotomy of Chrysalis faith and doubt in herself. 8.5/10.

Gilden-Fire: The tale of Korik of the bloodguard and his quest with two of the master's of the land to aid the giants of Seareach. This was originally cut from the Illearth War, the second book of the Thomas Covenant series. Does not work as a standalone work as it doesn't have a real end but interesting character perspective and flows well. 8/10.

Mythological Beast: In a world where violence has been eliminated by the close control of people by machines, a man experiences some very strange physiological changes which make him a threat to society.  I found the lead very distant and  inaccessible as a character. 6/10

The Lady in White: A blacksmith relates a tale of a beautiful yet mysterious woman who lures men into the woods. A complex lead and has a finale that left me thinking on it many hours later. 8.25/10.

Animal Lover: In the future a special agent is sent to investigate a game park with an unusually high death rate. Strong world building and cleverly makes you think the story is heading one direction before switching to another. 8/10.

Unworthy of  the Angel: A guardian angel that has his memory wiped after each mission is tasked with saving an artist's soul who is slowly killing his sister. Loved the lead and the concept. I would really enjoying seeing Donaldson take this one further. 9/10.

The Conqueror worm: A married couple with deep seated issues argue after returning from a party while a centipede is loose in the house. Both primary characters are fleshed out exceedingly well but the story just doesn't go anywhere. 5.75/10.

Ser Visal's Tale: An aristocrat is plied with drinks by young nobleman and tells the tale of how another nobleman inadvertently freed a witch and was excommunicated. Well developed characters and a great twist. 8.5/10.