Review: Heir to the Empire by Timothy Zhan 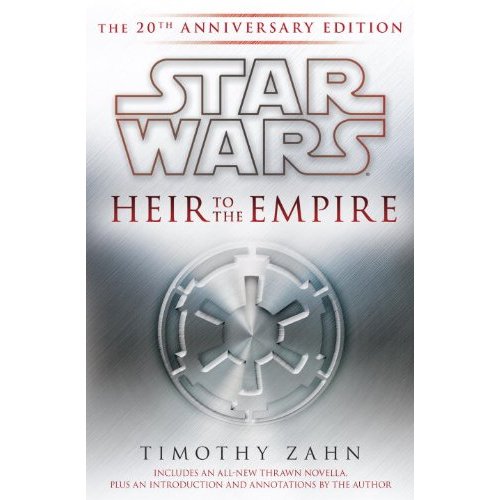 Five years after the events of Return of the Jedi the members of the rebellion have formed a New Republic, trying to get intergalactic trade up and running, enticing new worlds into the republic and dealing with the remnants of the empire. Thrawn, the last of the empire's Grand Admirals, has taken control of the scattered imperial fleet. He plans on using technology hidden away by Emperor Palpatine and an unlikely alliance with a dark Jedi, Joruus C'Baoth ,  to restore the fleet. In return for his aid C'Baoth would like other Jedi's to bend to his will, leading Thrawn's forces to target Luke Skywalker and his sister Leia.

For the most part Zhan succeeds in capturing the right feel for the characters, though at times it does feels like he is trying to hard by having them repeat lines from the original movies. I was especially impressed with how well Zhan was able to portray non-speaking characters like R2D2 and Chewbacca and really made them come to life.

The original Star Wars movies are pretty intent on portraying the empire as irredeemable evildoers which does give it an overstrung aspect of black and white. However in Thrawn Zhan has created a capable and intelligent nemesis who I couldn't help cheering for a little bit.

The copy I read was the 20th anniversary edition which included commentary by Zhan which added an behind the scenes aspect that added an interesting layer.

I did have an issue with some rather bizarre and silly aspects which popped up from time to time and did spoil my immersion. The best example is a new Wookie character that humans can understand due to a speech impediment.

I did find Zhan's prose a bit simplistic at times.

Overall Zhan delivers a very good Star Wars book but some issues can be distracting. 6.75/10.

This edition also contained a novella entitled Crisis of Faith. I enjoyed it and felt Zhan's prose markedly improved, is well paced and has one of the more interesting alien points of view I have read. 8/10.