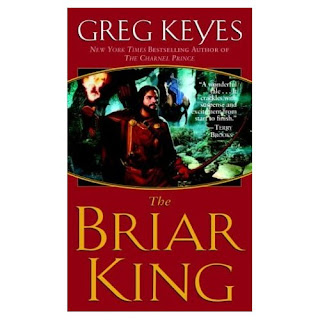 I will never forget reading the prologue to Robert Jordan’s Eye of the World. Without warning I was thrown into the middle of a rather confusing and intense scene. It was obvious that there was a great deal that had gone before that I was not privy too, I had to double-check the back cover to make sure that it was in fact the first book in a series. The whole experience was so disconcerting that I almost stopped reading it right then and there. I’m glad I didn’t. The prologue to Greg Keye’s Briar King bears many striking resemblances to that of Jordan’s. Both are set in the prehistory of the world that is about to be explored and both introduce characters and concepts that will only make sense much later on. Oh one more thing both pack one hell of a punch that drags you into the book and no matter how you kick and scream simply won’t let go.

Boiled right down to its base elements the plot is this; hundreds of years ago human slaves lead by Genia Dare tapped into a strange power, known as the sedos, to overthrow their Skasloi overlords. Little did they know that by using that power they had doomed themselves. This doom seems come to head in the ‘present day’ and we follow the beginning of this through the eyes of a cast of characters, including the descendents of Genia Dare. I really enjoyed the way Keye’s kept this in the background, like a hunting lion awaiting to pounce, while smaller scale events took center stage.

To use a pun Keye’s world building is literally out of this world and really deserves a great deal of attention. The history, geography and cultures are well thought out and I enjoyed seeing the influence of medieval as well as a different Mediterranean flavor in the pieces revealed in the first book. I think we really are only scratching the surface at this point and can’t wait to see where Keyes takes us from here. The cast of characters Keyes introduces us to are interesting and complex despite at first glance seeming almost stereotypical. High praise needs to be given to Asper White for being the first middle aged man in a fantasy novel to finally have the smarts to say ‘I’m one lucky bastard’ and just going with it when a pretty young woman falls in love with him instead of trying to chase her away for her own good. The most important aspect for me is that the different points of views actually feel like I’m seeing the world through different eyes to the character in the previous chapter and Keyes scores highly here as well.

All in all I couldn’t find anything Keyes did wrong, not one single thing. So I highly recommend this book. 9/10
Posted by Craig at 2:13 PM