Review: The Alloy of Law by Brandon Sanderson 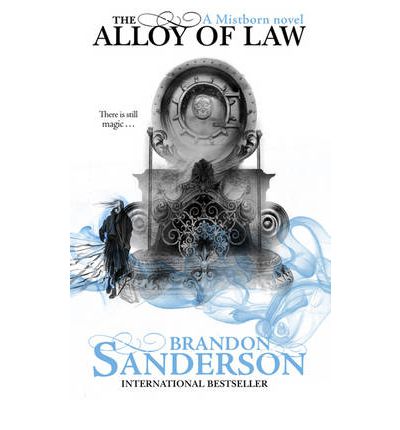 Waxillium Ladrian has spent the last twenty years in the roughs as a law keeper, enforcing the law on the frontier. A series of tragic events force him to return to the city of Elendel and take up the lordship of his house. At first Wax is reluctant to meet his responsibilities, wishing instead to become something of a vigilante, until his butler Tillaume convinces him that hundreds of people are relying on him and only he can be the lord of his family. Wax begins to take his responsibilities seriously and is even about to enter into an arranged marriage to benefit his house. Then a series of odd robberies begin to take place that have the authorities baffled. A group called the vanishers is robbing the cargo off trains and nobody knows how they are doing it. Wax tries to ignore them at first but when the group starts taking hostages he is compelled to intervene. Together with his partner Wayne, Wax is the only person who can get to the bottom of it.

First off I absolutely love the concept of exploring the same world in different time periods. Alloy of Law is set three hundred years after the events of the first Mistborn trilogy and for the most part is standalone. The world of Scadrial is now on the cusp of an industrial revolution but the magic systems of Allomancy and Ferchemy still play a major role in society. Sanderson again impresses with his use of magic combining the two systems in some very interesting ways. There are some rather well executed battle scenes, one involving a train, in this novel and the author really excels with these. One minor gripe that I had was using Wax's thoughts to explain some of the terms and workings of the magic systems really felt out of place in the contexts used on occasion. I know the author wanted to make the book standalone so new readers would not be lost but it did kill the mood for me.

The banter between Wayne and Wax is some of Sanderon's funniest writing to date though occasionally he did take things a touch too far for the situation. Otherwise the characters are well realized and the plot very well-paced.