Review: Side Jobs by Jim Butcher 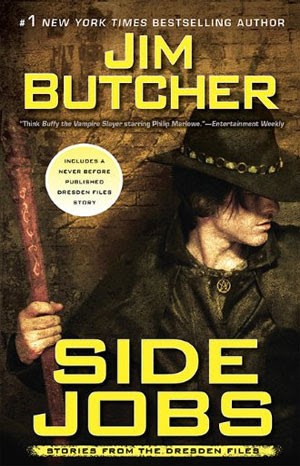 Side Jobs is a collection of short stories set within the universe of the Dresden files . Most of them have appeard in anthologies before but aftermath is exlusive to this collection.

A restoration of Faith: A young Harry Dresden is tasked with tracking down the runaway daughter of a rich couple. The couple then decide that the situation is too embarrassing and call the police claiming Harry and his partner have kidnapped the girl. Features the first meeting of Harry and Karin Murphy. Slightly rougher prose than we are used to from Butcher but by no means as bad as he makes out in the introduction. Tidy and heart-warming tale. 8/10.

Vignette: Harry and Bob the skull discuss his PI ad in the yellow pages. Funny as usual but very short and doesn't go anywhere. Probably included for completeness. 6/10.

Something Borrowed: Georgia goes missing on her wedding day and Harry has to track her down before a fairy disguised as Georgia marries Billy instead and does away with both of them. Solid and moves right along. 8/10.

It’s my birthday Too. Harry and Molly go to the mall after hours to give Thomas his birthday present. Thomas has been roped into taking part in a LARP session by an employee and things soon get ugly when a former LARP player shows up. The girl has since been turned into a real vampire and wants revenge on the people who scorned her. Fast paced and action packed. 8.25/10.

Herot: Mac calls Harry for help. A young woman has been kidnapped on the day of her honeymoon and Harry has to follow the monster who took her. The stakes are raised when Gard show up and explains that the monster is a grendlekin and the young woman doesn't have much time. Another solid piece 8/10.

Day off: Harry has a rare day off and plans to spend it with his girlfriend Anastasia. However Molly seems intent on blowing up his lab, two of the alphas have magical fleas and wannabe dark wizards are making a nuisance of themselves. Interesting enough but doesn't really go anywhere. 7/10.

Backup: Thomas is informed by Lara that one of their enemies in the infinity war is making a play. Whatsmore the enemy plans to use an unwitting Harry in her plans to distribute forbidden knowledge. With Harry having such a distinct voice Butcher's goal would have to have been twofold. To make Thomas' voice distinctive and interesting in its own right. Butcher succeeds at the first but sadly it was nowhere near as interesting. Thomas comes across as too much of an emo for my tastes 6.25/10.

The Warrior: Harry is worried about Michael and his family's safety when an anonymous person starts sending him photos of them. Definitely one of the stronger character driven pieces for me especially seeing a different side to Michael. 8.75/10.

Love Hurts: Harry and Murphy investigate a series of bizarre suicides of a number of couples and stumble onto a red court plot. One of the strongest stories with some real emotional oomph. 8.75/10.

Aftermath: With Harry presumed dead someone is targeting the weaker members of the magical community. When Georgia disappears Billy turns to Murphy for help. Unlike in Backup Butcher really succeeds here in creating a distinct and very interesting voice for Murphy. Murphy is put through the ringer. 9/10.

Overall fans of this series will be very pleased. Most of the stories are strong offerings and very fast paced. This collection really demonstrated Butcher's development as a writer, especially his growth in his characterization. 8.25/10.
Posted by Craig at 11:56 PM