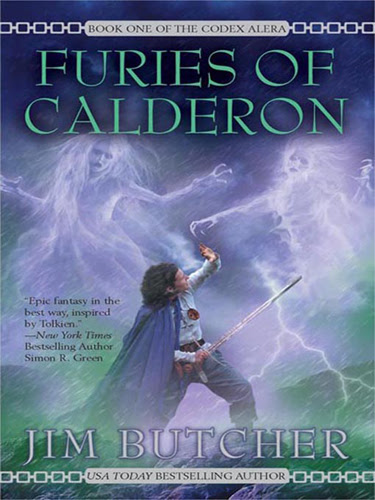 Amara is a young woman training to become a Cursori, messenger/spy, for the first lord of Alera Gaius. As part of her graduation tests she is sent with her mentor Fidelias to infiltrate a mercenary camp. Betrayed by her mentor what she discovers instead is a plot to overthrow the first lord and after a narrow escape Gaius sends her to the borderlands where he believes his enemies will enact their plan. Tavi is an unusual boy, he is furyless, lacking access to the magic that everyone else has. He lives on a steadholt controlled by his widowed uncle Bernard and his aunt Isana. When Tavi goes in search of a group of missing sheep he is swept up in much larger events than he could have ever imagined.

Unlike The Dresden Files Butcher is writing in the third-person and has no problems making this adjustment. The magic system is interesting and well thought out. People have access to elemental furies that grant them powers based on that element. For example Isana is a watercrafter and can control water and can heal grievous wounds. However each element has a drawback, using the same example watercrafters are sensitive to other people's emotions and can be influenced and even overwhelmed by them.

The characters are all well realised and I loved the way Butcher contrasted their strengths and frailties. Isana is an exceptionally powerful woman but her society values women as wives and mothers which is something she isn't and she is very self-conscious of this. Tavi is unusually clever but lacks even the most basic fury crafting. The villains are also multi-layered. Fidelias may be betraying his lord but believes it was the good of the land and will sacrifice anything for this. The action is for the most part limited to the steadlands but there are glimpses that the world may be influenced by Roman history and there will be lots of opportunities to explore this in future volumes.

It is obvious that Butcher is highly influenced by traditional epic fantasies, such as Tolkein or Eddings so there isn't anything genre changing here but there is no doubt he makes this story his own. Butcher’s pacing is exceptional and he has a talent for writing large scale battles is something we haven't been able to see in the Dresden books.

Overall Butcher's attempt at epic fantasy while not genre changing is an exceptionally good one. 8.5/10.