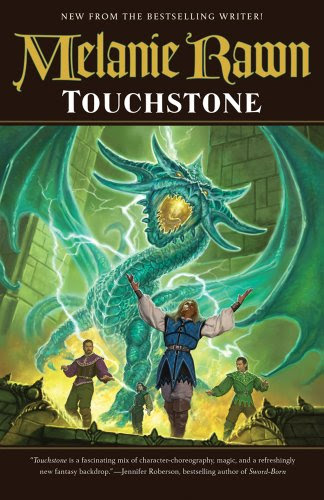 Cayden Silversun is a young man determined to make sure his life runs to his own design. Cade is the unattractive son of aristocratic parents who either wanted him to join the royal court or at least find an acceptable profession that won't reflect badly on them. Cade also gets glimpses of possible futures that he has the power to change though with often unforeseen results. Cade is part of a theatre group, each contributing some element to a magical performance, but although they are highly talented, they lack a glisker who can match their skill. That is until they meet Mieka. Mieka though complicates Cade's life greatly, although Cade is fond of the young man nobody can make him angrier and Cade fears the darkness in his own heart and some of the futures with Mieka are less than pleasant.

I found Rawn's latest novel to be a breath of fresh air in almost every respect. The setting is indeed an intriguing one, a world where fairy, wizard, human, troll and a host of other races have interbred to the point where everyone is a mixed breed of some sort. The character development is strongly focussed on Cade and Mieka which works well. As the main plot line deals with their relationship this made sure things ticked along nicely and there was just enough fleshing out of the support characters to keep them interesting.


In most of Rawn's novels the story follows characters over good chucks of time often decades. She tried a different approach in Fire raiser by working with a much shorter stretch of time. Rawn does it again here and works out just as well in my opinion. The only minor criticism I have is the conclusion felt slightly anti-climactic. Yes it is an obvious turning point but I was hoping for something a bit more substantial.

Overall Rawn's latest effort is a breath of fresh hair that combines an interesting setting with some very good character development. 8.5/10.