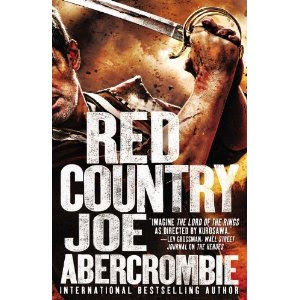 Eking out a living on the outskirts of Squardeal, a frontier town in the middle of nowhere, is hard but Shy South has never been afraid of hard work. However when returning to her farm after selling the season's crops she finds her home burned and her brother and her sister stolen, she realizes may have to return to the ways of her bloody past. She is a accompanied by her cowardly step father Lamb, a man whose past may be bloodier than her own (hint, hint). Meanwhile The union is trying to stamp out rebellion on it's outskirts and have hired Nicomo Cosca's company of the gracious hand to do it. The comapny has with them their very own lawyer Temple, a man who prefers to take the easy path. However when he crosses Shy's path he may not have a choice in the matter.

This book had been marketed as Abercrombie's Western and this is very much reflected in the themes of the book, such as the byplay between order and freedom in a frontier setting. Like Abercrombie's two previous books this one stands nicely on its own but long time fans will be happy to see the return of Logen nine-fingers (although he is never once called by this name throughout the book) A host of other familiar faces make appearances, including Cosca, Shivers and Sergent Friendly and one of their stories is completely resolved.

I enjoy how Abercrombie creates a sense of forward momentum in his books with some of the recurring characters being noticeably older and the technology of the world continuing to progress.

While interesting in their own right most of the Point of view characters aren't as well portrayed as characters in previous books. Though having said that I thought that Temple really stole the show and was glad to see his story taken in the direction I thought that Shivers story should have been taken in Best Served Cold. A lot of reviewers will tell you this book is Abercrombie at his most cynical but I don't think that is the case; Shy and Temple's story is as close to a happy ending as you will expect to see in one of his books.