Alcatraz versus the scrivener's bones review 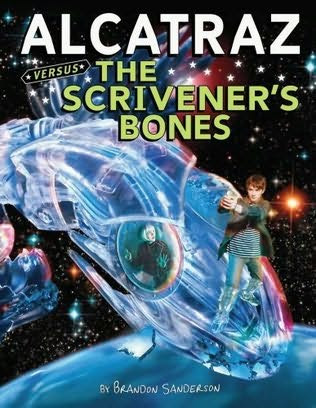 Before picking up the second book in the Alcatraz series I had to wonder if the novelty would wear off. After all the first book was an interesting mix of young adult/fantasy adventure/writing parody that quite frankly had never been seen before. It was both entertaining, fun and a bit silly at times (but in a very good way). Could that formula work a second time? Thankfully I can say the second book is just as good if not better than the first.

After a close encounter with librarian agents in a local airport Alcatraz finds himself in transit to Nalhalla with Bastille, her mother and his newly met cousin and uncle Australia and Kaz in a flying glass dragon. Alcatraz receives a message from his grandfather informing him that he has tracked Alcatraz’s father to the library of Alexandria, which is naturally one of the most dangerous libraries on account of having undead librarians who try to steal people’s souls. Alcatraz and co have to try and find his father and grandfather,keep their souls and avoid a nasty cyborg-like librarian who is a member of the Scriveners Bones and wants to steal Alcatraz’s translator lenses.

The story, like that of the first book, is told by Alcatraz in the style of an autobiography with frequent interruptions for general silliness. Aside from the comments on writing, the genre and literature in general Sanderson introduces some interesting ways to play around with the reader, including using 0’s,1’s and 7’s to make a smiley face in a paragraph.Surprisingly for a YA novel that doesn’t take itself too seriously there is fair amount of character development, especially with Alcatraz and Bastille. Both have grown since the last novel and we really start to see what makes them tick. As can be expected Sanderson really fleshes out one of the magic systems, the smedry talents, in this novel. There is a glimpse of where they came from and how they function. One thing which I really enjoy about this series is the subtle hints Sanderson puts in to future books. It is actually quite fun trying to figure out how some really arbitrary and strange statements will be incorporated into future volumes.

Overall Sanderson is able to successfully recreate the formula that made the first book so enjoyable. If they liked the first one be sure to give the second a go. 8/10.
Posted by Craig at 9:28 PM