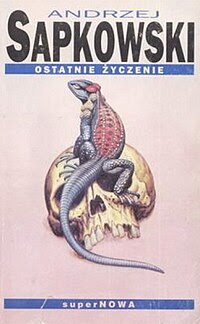 There is a lot of hype around polish author Adrzej Sapkowski with his win in the inaugural David Gemmell legend award. As a result it was with high expectations that I read the first of his books that has been translated into English;The Last Wish. I was severally disappointed.

Last Wish follows the exploits of a Witcher, Geralt. Witchers are taken as children and are changed and trained to fight monsters. At times Geralt comes across as a fairly interesting character, slightly reminiscent of Harry Dresden but all too often his actions are downright strange and unexplained. The book is divided into a few short stories that follow Geralt’s exploits that are loosely tied together by his time recuperating under the care of his friend the priestess Nenneke after a particularly nasty scuffle with a striga. Presumably most of these episodes are the protagonist’s reminisces by that is certainly not clear. Each of these short stories seems to revolve around fairy tales, including snow white and beauty and the beast with some intense twists. It is difficult to see if there was any point at all to the book. There are some social commentaries applicable to modern society, such as people being more inhuman to other people than the monsters, but they seem pretty basic. Perhaps they would make more sense set against the backdrop of the late 80’s and early 90’s Poland but I don’t know enough about the issue to comment.

My biggest criticism is of the actual writing itself. It is terribly awkward and messy and at times hard to follow. Sentences are often overly long and poorly ordered. I don’t know if this is the Sapkowski’s fault or that of the translator Stok and who knows it might be considerably better in the original Polish. The dialogue of the characters is also overly simplistic and at times makes it hard to relate to them. If I was just handed the book without a cover I would have assumed it was someone’s first go at writing, it really was that bad. Due to the writing I almost gave up fifty pages into the book, I’ve only ever done that twice before in my life. There is also an attempt at humor which comes across as crude most of the time.

As things stand I won’t be giving Blood of Elves a try, David Gemmell award or not. The Last Wish has just put me off of Sapkowski that much. The only way this will change is if someone whose opinion I trust tells me that these flaws aren’t prevalent in the rest of his books. I really hope that most of these are the result of translation, otherwise I really have to question Polish taste in literature. Although I wander if English books come across this badly when translated to other languages. In sum I do not recommended this book.4.5/10.
Posted by Craig at 8:16 PM