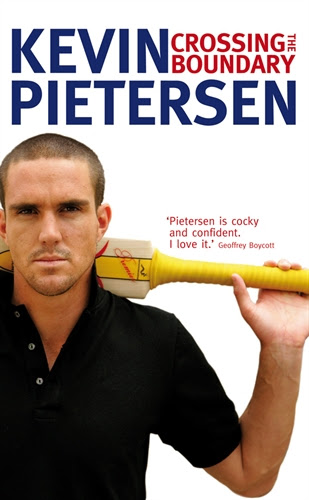 Okay so as you might have noticed this isn’t a fantasy book, but I read it and it’s my blog so I can review what I like . For those who might not know Kevin Peiterson is a batsman who plays for the England cricket team. He was born is South Africa but left when he was 20 to play in and qualify to play for England.

Pieterson wrote the book himself and it details his childhood growing up in Pietermaritzberg and Durban, early cricketing career in South Africa, the move to England and his cricketing career in that country. As is to be expected the 2005 Ashes series is the focal part of the book and it begins with it and (almost) ends with it.

For a guy who wouldn’t have had a lot of experience writing Pieterson does a really good job and his writing is concise and to the point. I do however question whether it should have been written when it was, Pieterson was only twenty-six and had only spent about two years playing international cricket. There are parts when it turns it a bit of a bitching session, with everyone from his high school coach to his first county captain coping it. A few more years may have matured and mellowed him and made for a better read. At the end of every chapter there is a piece written by someone who knows Pieterson giving their thoughts on him. The one by Stuart McGill was especially interesting when he says that Pieterson was partly to blame for the problems he had with teammates at Nottinghamshire. It was nice to get a balanced opinion.

Still I did find it fascinating to get an insiders view on what happened during the Ashes. You really get to see the inside working and dynamics of the England team. The version that I read had an extra chapter detailing the disastrous follow up series in Australia. This is all well and good but since Pieterson had already summed up everything in the previous chapter it did feel out of place and just something thrown on at the end at the last minute.

All in all there is a lot of good and bad in this book. I still feel that an autobiography should be written at the end of a career not the start of it and would have gladly waited a few years for a more complete book. 6.25/10
Posted by Craig at 4:01 PM