Review: The Heroes by Joe Abercrombie 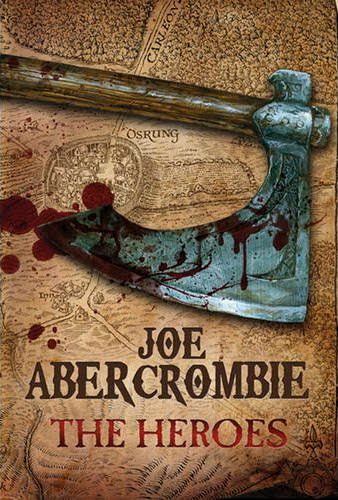 After months of campaigning in the north the Union army is instructed to be bring the war with Black Dow to a swift conclusion. The two sides converge on an unimportant valley where a forgotten ring of stones (the heroes of the title) rest on a hill. Bremer Dan Gorst a disgraced swordsman and former guard of the king now occupies a redundant office of king's adviser to the war. Gorst seeks either redemption or his own death making him a threat to both sides. Prince Calder, the son of the former King Bethod, is convinced that the new king Black Dow wants to see him dead. He wants nothing to do with the fighting itself but sees an opportunity to gather allies and try to oust Dow. Curden Craw is a veteran of countless battles. He follows the old way and wants to do the right thing. Dow is his chief but Calder is like a son to him and he finds himself caught between the two. Corporal Tunny of the union's first battalion knows what war is all about; how to survive it and do as little as possible. Which is why being saddled with a bunch of raw recruits is a bothersome irritation he could do without. Beck is the son of a famous named man who died at the hands of the Bloody Nine. He is tired of life on the farm and wants to make a name for himself. But he way just get far more than he bargained for. Finree's husband is a good man, weighed down by the deeds of his father he tries to make his way through life with bravery and by doing the right thing. Luckily Firnee is around to balance him through her own ruthlessness and ambition to see that he gets what he deserves.

The first law trilogy was Abercrombie's epic fantasy Best Served Cold was his fantasy thriller and The Heroes is definitely his fantasy war novel. While there are big names on display here Abercrombie does spend a lot of time looking at war from the common soldiers point of view. There are a couple of sequences where Abercrombie will switch POV's along a line on both sides as characters kill each other off which I thought was brilliant and did a great job in building sympathy for both sides. Adding to this was the fact that the actual cause of the war is never discussed in depth although it's obvious it is merely a battleground for Bayaz and his enemies larger battle.

Abercrombie has an uncanny ability to built interesting and unique POV's for his characters and Gorst and Calder were my two favorites by far. Again Abercronbie is able to inject a degree of grim humour into proceedings which ensures that the narrative doesn't get to bogged down with all the violence. The pacing in this one was certainly the tightest we've seen from the author, not surprisingly as the story is centered on the events of a single battle.

Overall this another case of Abercrombie doing what he does best. Highly recommended. 9/10.
Posted by Craig at 10:31 PM