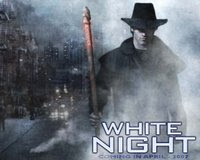 Harry Dresden is called in by Karin Murphy to investigate what appears to be a routine suicide. Murphy believes it is a little too textbook and is proven right when Harry discovers a magical calling card referencing the exodus quote of killing witches. Harry quickly discovers that this is just the latest killing and it appears someone is targeting the low level magic users of Chicago, that someone also seems to be leaving clues that Harry is supposed to find. When evidence emerges that the killer might be his half-brother Thomas, Harry is determined to find the real killer.

Anyone who has read the Dresden files before will recognize the structure of this book. Harry runs around finding clues and getting into trouble for most of the book which is concluded in a massive confrontation between Harry, his allies and said bad guys. Although we've seen this all before I don't have any issues with it and if ain't broke don't bother fixing it.

An area where Butcher has certainly brought his A game in this one is the characterization. The two main issues are Harry's relationships with Lasciel the fallen angel trying to possess him and his half brother Thomas. Harry seems to be drawing on Lasciel's help almost indiscriminately. As always the story is told from Harry's perspective and form this it is obvious that he doesn't see a problem in using Lasciel'a abilities whereas in previous books he wouldn't have done this. It conjures the image as Harry as a drug user; he simply doesn't realize he has a problem. Others begin to notice the changes in Harry's demeanor and an increasing propensity for Harry to lash out in anger. At the same time Laciel seems to being turned by Harry's soul. I loved the ambiguity here and the way Butcher hinted it could go either way. Although the issue is seemingly resolved by the end of the book I get the feeling Butcher might be heading in a very different direction with this. Harry's trust in Thomas doesn't seem to waver much and I loved the hints Butcher dropped in about where this one was going and the rather amusing conclusion.

Other characters go through some pretty intense development as well. I loved the moment the normally unflappable Ramirez snapped at Harry for keeping secrets right before the books major confrontation. Harry's apprentice Molly also does some much needed growing up.

Overall Butcher continues to deliver as he always does with this series and with the increased character development seems to have taken it up another step. 8.5/10.
Posted by Craig at 5:13 PM