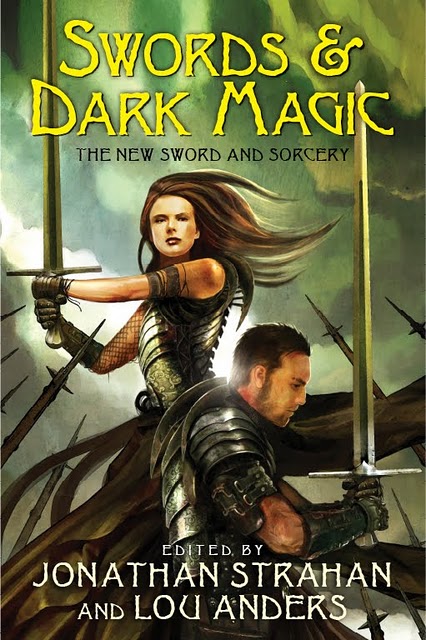 This anthology seems to have come about due to a number of the new wave of fantasy authors authors incorporating elements of classic sword and sorcery elements in their work leading to something of a revival. Any anthology with new stories from Abercrombie, Lynch and Keyes was bound to pique my interest.

Goats of Glory by Steven Erikson: I must admit that I have mixed feelings about Erikson's writing. I was so sick of seeing all the 10/10 reviews for Gardens of the Moon, despite it's rather obvious flaws, that I haven't read anything past his second book despite greatly admiring his prose. This short story just might get me reading him again. It is a fast paced tale about a group of soldiers who are tricked into staying the night in a demon infested fort. 8/10.

Tides of Elba: A Tale of the Black Company by Glen Cook: One of the weaker stories in the anthology for me. I found Cook's writing to be sparse and lackluster and the story never engaged me. Basically the black company are told to find a woman, supposedly a leader of a rebellion, but believe they are being set up. 5.5/10

Bloodsport by Gene Wolfe: Some interesting ideas in this one and I liked the prose but it seems to wander around a bit with no clear goal. A knight relating bits of his life, including his part in a chess-like bloodsport and falling in love with a pawn, around a camp fire. 6/10.

The Singing Spear by James Enge: A light but engaging tale about Morlock the maker and his clash with a thief who has gone on a rampage after stealing a magic spear Morlock invented. 7/10.

A Wizard in Wisecezan by C.J. Cherryh: Tale about a wizard who has gone into hiding after his city was taken over by a warlord and a dark wizard. One of the wizards students is compelled to aid a man in overthrowing the warlord. Very convincing voice for the student in this one. 7.5/10.

A Rich Full Week by KJ Parker: One of the gems in this collection. A moderately skilled magician is dispatched to the countryside by his order to slay a zombie, who may or may not be magically gifted as well. Nice little twists in this one. 8.5/10.

A Suitable Present for a Sorcerous Puppet by Garth Nix: Light and humorous tale about an injured knight who winds up in all sorts of trouble by trying to find a birthday present for his puppet companion. 6.75/10.

Red Pearls: An Elric Story by Michael Moorcock: Elric travels to the underside of the world in hopes of finding a white sword but is soon drawn into a family feud involving dragons, pirates and slavers. 8/10.

The Deification of Dal Barmore: A Tale from Echo City by Tim Lebbon: Another beauty. A priestess is trying to have an atheist sorcerer crucified on a wall worried that if he is rescued or dies any other way he will be deified. Highly original tale with some really interesting twists. Of all the stories in the collection this is the one that really pushed the boundaries of moral ambiguity in it's characters. 8.5/10.

Dark Times at the Midnight Market: By Robert Silverberg: Interesting if slightly predictable tale about a magical shop-owner who winds up in hot water after selling a love potion to a minor noble. 8/10.

The Undefiled by Greg Keyes: I was slightly disappointed in this one considering how much I have enjoyed Keyes work to date. A tale about fool-wolf a warrior possessed by a bloodthirsty goddess who becomes involved in a feud between the followers of two deities. Feels a little too much like a piece plucked from a larger tale. 6.75/10.

Hew the Tintmaster by Michael Shea: Humorous and it has its moments but does tend to drag at times. Tale about a barbarian warrior and a painter who are sent into the far future by a wizard to save the world by painting a mural. 6.75/10.

In the Stacks by Scott Lynch: Lynch is certainly on form in this one. Tale about four wizardry students whose exam involves venturing into a semi-sentient library to return some books. 8.5/10.

Two Lions, a Witch and the War-Robe by Tanith Lee: A clever tale about two lookalike strangers who are forced to try and recover a magical robe. 7.75/10.

The Sea Troll's Daughter by Caitlin R. Kiernan: A clever-take on Beowulf. A lesbian warrior kills a troll but the village elders are reluctant to give her the reward they promised without proof. The body eventually does wash up but with tragic results. Kiernan did an excellent job in moving this one in different directions that kept the reader guessing. 8.5/10.

Thieves of Daring by Bill Willingham: Worst story in the bunch by far. I have nothing against the prose but this is nothing more than a fragment of a story that goes nowhere. Lackluster effort. 4/10.

The Fools Job by Joe Abercrombie: Story about Craw and his crew who are sent off to a village in the middle of nowhere to steal 'a thing'. Brilliant tale with Abercrombie doing what he does best. 9/10.

Overall an interesting collection and there are certainly a few authors whose work I have never encountered before who I will be following up on. 8/10.
Posted by Craig at 6:54 PM